The fears arising from the impact of the coronavirus on the global economy are reaching overwhelming levels. The last few days have seen the traditional capital markets experience a bloodbath, particularly March 12.

Covid-19 caused investors to panic resulting in major sell-offs across different asset classes. Many crypto proponents had thought that cryptos, primarily Bitcoin would act as a haven asset in times of global economic crisis and uncertainties.

However, that is yet to be the case so far, according to data published by IntoTheBlock.

The entire crypto market experienced its worst day since January 2015. It has been severely affected recently, with prices dropping rapidly wiping about $50 billion from the market capitalization.

Bitcoin’s 41% crash resulted in a similar drop of 41.01% of the number of addresses in the money, as documented by IntoTheBlock’s (ITB) In/Out of the Money data tool.

What does In/Out of the Money mean?

For any address with a positive balance of tokens, ITB identifies the average price (cost) at which those tokens were purchased and compares it with the current price.

However, Bitcoin gained some upside momentum breaking even the major resistance levels that had formed between $5,200 and $5,370. In that region, 114BTC was held by 325 thousand addresses.

On the 1-hour timeframe, a strong oversold bounce took place after the relative strength index (RSI) plunged to 8.45. That RSI plunge represented a low never seen since November 23, 2018. For now, traders are following developments to see if the oversold bounce will increase purchasing volume.

Some commentators allege that the plummet below $4,000 may have liquidated most of the Bitcoin-backed loans that are offered by the decentralized finance platforms.

After the drop, Bitcoin was expected to bounce off the high volume node of the volume profile visible range from $4,030 to $3,637, and that is what happened. The crypto market cap now stands at $164.1 billion and Bitcoin’s dominance is 63.9%.

Bitcoin price on March 12 crashed 46% within a day and then recovered above $5,000. The Bitcoin holders are in the money based on the current price of $5,740. 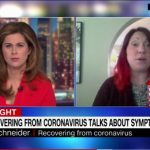