As Bitcoin’s popularity has grown, the controversy over its energy consumption and environmental impact has also intensified.

According to a recent report published on January 25, 2022, by CoinShares, Bitcoin accounted for just 0.08% of the world’s carbon dioxide (CO2) emissions in 2021, indicating that talking points criticizing the network’s power usage appear to have been inflated.

“At 0.08 % of global CO2e emissions, removing the entire mining network from global demand—and thereby depriving hundreds of millions of people of their only hope for a fair and accessible form of money—would not amount to anything more than a rounding error.

The research presents the most up-to-date information on the current condition of the Bitcoin mining sector, as well as information on environmental, social, and governance (ESG) problems.

As per the data:

“At an annual energy draw of 89 TWh, the Bitcoin mining network uses approximately 0.05% of the total energy consumed globally.

Since Bitcoin first emerged, debates about the flagship cryptocurrency’s energy consumption and indirect environmental effect have recurred, becoming a perennial topic that tends to be revived with each subsequent market cycle.

In particular, the report established a complete model to predict emissions and a data-gathering mechanism to supply the framework with accurate information. It also labeled the CO2 emitted in the process of mining Bitcoin as “inconsequential,” it stated:

“In the grand scheme of things, the carbon emissions emitted by electricity providers supplying the Bitcoin mining network are inconsequential.” 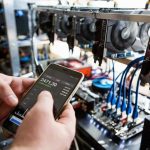