Like most of the major cryptocurrencies, Cardano (ADA) has been trading in the red for the past week, but the tide could soon be turning after the latest development which saw Tether (USDT) and USD Coin (USDC) arrive on its blockchain.

Specifically, the two major stablecoins have joined the Cardano network via the decentralized crypto exchange (DEX) WingRiders, according to the blockchain’s founder Charles Hoskinson who tweeted the announcement on April 12.

To make this happen, WingRiders has enlisted the help of the Layer 2 Protocol on the mainnet, Milkomeda Foundation, stating on its Twitter page:

“Through our partnership with Milkomeda WingRiders will bring Stablecoins and liquidity through the Milkomeda bridge at launch.”

Leveraging the Milkomeda Bridge sidechain and its Ethereum Virtual Machine (EVM), users will be able to trade USDT and USDC on Cardano for the first time, allowing them to benefit from the stablecoins’ touted role as the safe-haven asset against market volatility.

Considering the success and popularity of the two stablecoins, the ecosystem’s supporters believe the recent events could lead to a hike in the on-chain activity and trade volume on the network, as well as an increase in the price of ADA itself.

Finbold had earlier reported on the CoinMarketCap community’s predictions that the price of ADA could reach a median price of $1.35 by the end of April, which would be a 42.11% increase from its current price of $0.95.

The Cardano price at press time represents a 0.90% advance over 24 hours and an 11.95% decrease from seven days ago.

In terms of market capitalization, Cardano ranks as the eighth largest cryptocurrency, currently standing at $32.24 billion, according to CoinMarketCap data. 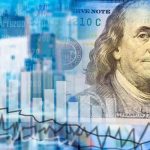