Nevertheless, CVNA announced a second straight quarter of profits before interest, taxes, depreciation, and amortization of $6 million, down from $112 million in the second quarter. In addition, revenue at the secondhand retailer more than doubled to $3.48 billion in Q3, driven by a 74% rise in retail unit sales to 111,949 units.

Consider that the overall gross profit per unit climbed to $4,672 in the most recent quarter from $4,056 in the previous quarter, indicating that the company’s fortunes are not entirely in ruins. The company increased available inventory from an average of 12,800 units in the second quarter of this year to an average of 16,400 units in the third quarter.

Among the challenges faced by Carvana during the quarter were operational limits imposed on by the aggressive purchase of client vehicles, further enhanced by the ongoing coronavirus epidemic.

“Despite these constraints, we are now buying and selling over (three times) as many cars as we were two years ago, and our team is hard at work unlocking additional capacity.”

Operating capacity, according to the corporation, will be a crucial driver of development in the future. It is on schedule to open eight additional inspection and reconditioning facilities by the end of 2022. Carvana stated it gained nine new markets during this time, bringing its total number of markets covered to 80.6% of the population of the United States.

The firm also announced a collaboration with Hertz during the quarter, in which the rental car operator would benefit from Carvana’s technology and logistics to sell additional automobiles online.

CVNA has traded in a wide range of $280.25 to $309.50 on the stock market during the last month, which is a large range. It is now trading in the middle of this range, suggesting that resistance may exist above the current price.

In particular, CVNA does give a good setup possibility at this time, as prices have been stabilizing recently and volatility has decreased. Noteworthy is that a resistance zone begins around $301.76, just above the current price and that the area just above this resistance zone may be a decent entry opportunity. 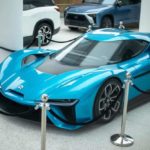