Troubled cryptocurrency lending firm Celsius Network LLC, which has infamously come into the limelight after stopping all of its 500,000 users from withdrawing their money due to the carnage that engulfed the crypto market, is making headlines again.

As it happens, the investor documents from 2021 reveal that Celsius, which was marketed as less risky than a bank and with better returns, actually “carried far more risk than a traditional bank,” Eliot Brown and Caitlin Ostroff of the Wall Street Journal reported on June 29.

Specifically, the documents reviewed by the Journal have shown that “the lender issued numerous large loans backed by little collateral” and that “Celsius had little cushion in the event of a downturn, and made investments that would be difficult to quickly unwind if customers raced to withdraw their money.”

According to the documents, Celsius had $19 billion in assets and around $1 billion in equity as of summer 2021, before it raised new funds. The report said that “the median assets-to-equity ratio for all the North American banks in the S&P 1500 Composite index was about 9:1, or about half that of Celsius.”

This ratio is one of the indicators used for measuring risk when it comes to banks. In terms of “unregulated companies like Celsius, the ratio of 19-1 is particularly high given that some of its assets were investments in the extremely volatile crypto sector,” explained Eric Budish, an economist at the University of Chicago’s business school who studies cryptocurrencies.

As Budish stressed, this structure was precarious, resembling a feature of the 2008 financial crisis:

“It’s just a risky structure. (…) It strikes me as diversified as the same way that portfolios of mortgages were diversified in 2006. (…) It was all housing—here it’s all crypto.“

Meanwhile, Celsius founder and CEO Alex Mashinsky centered his marketing campaign on comparing his company to traditional banks and pointing out all the ways in which Celsius was preferable to them.

One of Mashinsky’s arguments was that Celsius had “much less risk, but we’ve managed to deliver high single-digit, low double-digit numbers,” as he told the YouTube channel CTO Larsson in August 2021.

However, after its CEL token dropped over 60% in mid-May amid “extreme market conditions,” Celsius froze withdrawals for its customers in mid-June, and was seen adding more Bitcoin (BTC) collateral as a last-ditch effort to protect its crypto assets from liquidation, Finbold reported in mid-June. 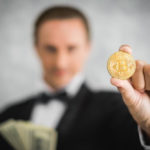