Cryptocurrency markets have inched higher over the weekend, and the momentum has come from decentralized finance (DeFi) tokens.

Around $4 billion has been added to cryptocurrency total market capitalization this weekend as the figure reached $274 billion. In general, however, markets are still range bound and have not been able to break out of their sideways channel for the past couple of months.

A dip on Sunday threatened to send prices lower, but things had recovered by the Monday morning Asian trading session.

Bitcoin has been largely inactive, but did manage to tap $9,300 once again on Sunday according to Tradingview.com. The world’s dominant digital asset is still trading below the 50 day moving average and has yet to show signs of a breakout in either direction.

Analysts have identified a bullish signal in the BTC hash ribbon which is now in the green. Digital asset manager Charles Edwards noted;

“A #Bitcoin Hash Ribbon “buy” signal is forming today. If price closes this daily above ~9230, it will be confirmed.”

The daily close was just above $9,300 which confirmed the formation of the signal. Fellow analyst, Josh Rager, added that volatility is at a historical low and a major move is approaching.

With Bitcoin remaining lethargic, cryptocurrency market gains have been dominated by DeFi. The nascent industry hit a new high in terms of total value locked pretty much every day last week as investors deposited crypto collateral.

That level has now reached a record of $2.3 billion according to Defipulse.com.

In less than a month, DeFi markets have over doubled in TVL whereas crypto markets have only managed to eke out a 3% gain over the same period.

Ethereum, which is the backbone of all things DeFi, has not managed to benefit from this liquidity farming frenzy as prices have remained flat. ETH has floated around the $240 level and is unlikely to do much in terms of price until Phase 0 of ETH 2.0 is rolled out, hopefully later this year.

DeFi based tokens on the other have been on fire with massive moves for Compound, (COMP), Balancer (BAL), Kyber Network (KNC), Aave (LEND), Synthetix (SNX), Elrond (ERD), 0x (ZRX), Ren (REN), and Bancor (BNT) over the past week or so. Today’s top performer is Chainlink, which has just hit a new all-time high above $8. 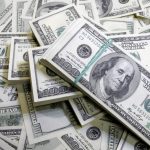 Stocks slide on COVID concerns as the greenback strengthens