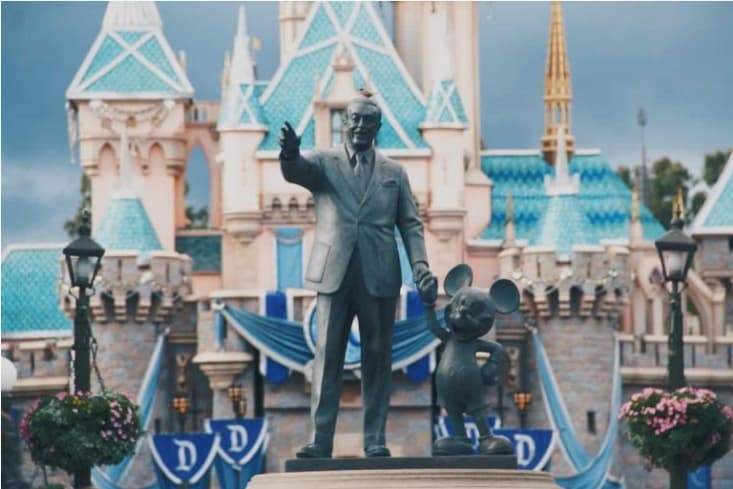 The recovery from the epidemic and the resumption of full activities, as well as Disney’s remarkable success in expanding its streaming service with recent launches such as Star + in Latin America, among other things, should satisfy stockholders for the time being.

Interestingly, the company’s shares are trading below its 20-day simple moving average (SMA) but above its 50-day SMA, which usually indicates an uptrend. Given the recent performance and a price below the 20-day SMA, the firm’s short-term momentum seems to be mixed.

Currently, DIS is trading at the top of its 52-week trading zone while the S&P 500 Index is in the upper part of its 52-week range, indicating that DIS is more or less in line with the market.

In fact, DIS has been trading in a rather broad range of $169.03 – $187.10 during the past month. It is presently trading in the center of this range, suggesting that traders may find some resistance above the current price.

In terms of stock trading, a good setup pattern is observable in DIS. Recently, prices have consolidated, reducing volatility. Above the present price, a resistance area begins at $178.08. The area just above this level of resistance may serve as a promising entry point. Traders may put a stop order below the current price of $177.51, which is a support zone.

Between $172.39 and $177.51 is the area of support. Multiple trend lines and significant moving averages in various periods combine to create this zone. Meanwhile, resistance can be observed at $189.73 from a horizontal line in the daily time frame.

It’s worth mentioning that 20 Wall Street analysts have provided 12-month price estimates for Walt Disney in the past three months. In general, a median price goal of $217.79 is expected, with a high prediction of $263.00 and a low projection of $185.00 forecasted. The average price objective indicates a 22.55% increase over the stock’s most recent trading price of $177.71.

In the last three months, seventeen TipRanks experts have repeated their ‘Buy’ recommendations for DIS, while three have advised ‘Hold.’ It’s worth noting that none of the analysts recommend selling their stocks.

As a result, most experts believe that Disney is a sound investment, with a rise of 22.55 percent from the most recent price of $177.71 projected for the average price target.

However, if you bought Disney shares for the dividend, be prepared to wait many quarters, if not years, for the payments to resume. At an investor conference Disney CEO Bob Chapek has stated dividends won’t be returning anytime soon:

“Number one, our clear priority, and the Board agrees with management, that the clear priority is funding our new growth businesses that we’ve got. But once we get to a point where, again, our cash flow is funding that, handling some of the debt that we’ve got, then everyone agrees that it would be a great thing to reinstate that dividend and do share buybacks. But that’s sort of in the distant future.”

Consider that Disney produced $2.9 billion in operating cash for the nine months ending July 3. That is, Disney has barely earned enough to cover its 2019 dividend payment. Unsurprisingly, the CEO is reluctant to restore the dividend.

While the company’s activities have resumed, they are still far from full vigor, capacity limitations persist, and people are still wary of leaving their homes.