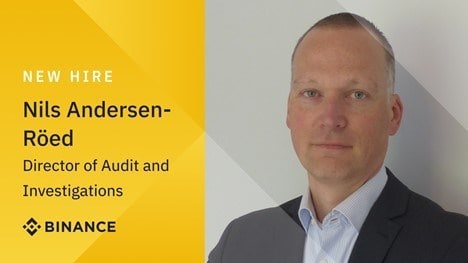 In a press statement, Binance noted that Röed would mainly focus on conducting and leading internal and external investigations to identify individuals intending to commit crime through the exchange.

“My goal is to make the cryptocurrency industry (and Binance specifically) a safer place. International collaboration between the industry and law enforcement agencies is key, criminals don’t care about borders. Increased collaboration between the public and private sector will also be beneficial when it comes to fighting crime and making this industry a safer place for everyone,” said Röed.

Under his portfolio, Röed previously served as the Project Leader of the Dark Web Unit of the Dutch National Police.

Binance on a hiring spree

The new hire forms part of Binance’s efforts to ensure it meets the regulatory requirements in several jurisdictions. Notably, the exchange has been on the spot for allegedly aiding vices like money laundering.

Recently, Binance also announced the hiring of a former detective in forensic analysis of digital media. On September 10, the exchange onboarded Aron Akbiyikian to its Audit and Investigations team. He will also work to ensure the safety of Binance users and the crypto industry.

Following the regulatory focus on the exchange, Binance has made high-profile hiring to strengthen its team in the recent past. In August, the exchange appointed Richard Teng as the Chief Executive Officer for Singapore’s operations.