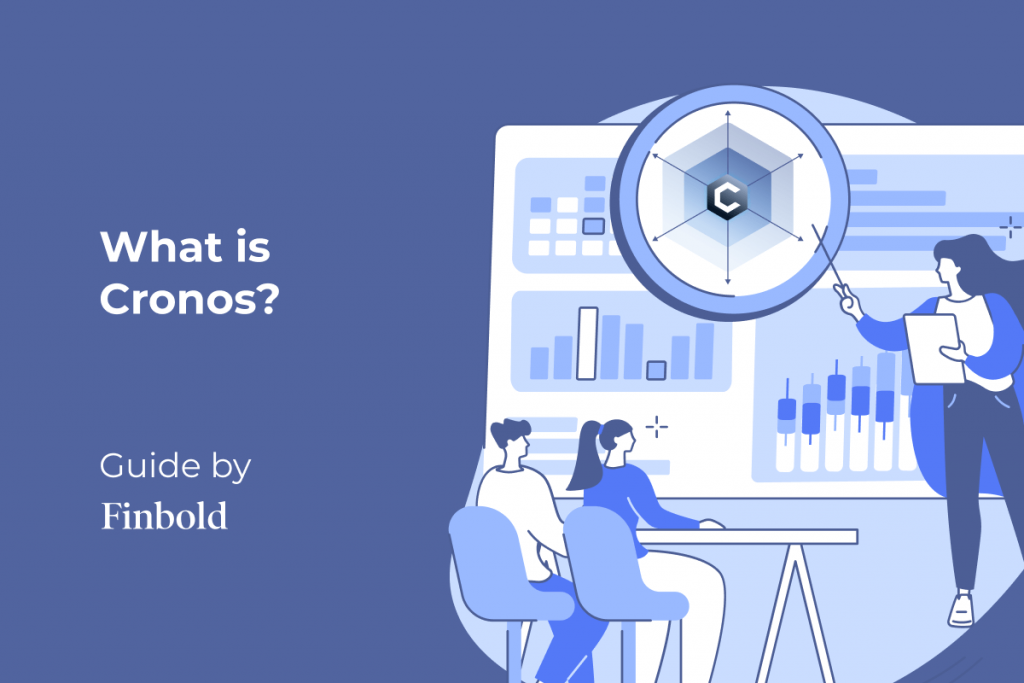 In this guide, we will look at the EVM-compatible Cronos Chain, a parallel network to Crypto.com’s Crypto.org Chain. Specifically, we will consider its value proposition, use cases, features, and how it works. Additionally, there is a brief comparison between Cronos and Crypto.org Chain, and Ethereum.

Cronos is an Ethereum Virtual Machine (EVM)-compatible chain with added support for IBC (Inter-Blockchain Communications) networks based on the Cosmos SDK. In other words, it is compatible with Ethereum and Cosmos-based ecosystems, allowing for easy porting of Ethereum smart contracts and decentralized apps (dApps).

The network, which launched on November 8th, 2021, runs parallel to the Crypto.org blockchain, the network that powers Crypto.com’s Pay feature. Crypto.com is the company behind both blockchains and has existed in the cryptocurrency space for several years, having launched in June 2016 with its headquarters in Switzerland.

The crypto payments company, co-founded by Kris Marszalek, Rafael Melo, Gary Or, and Bobby Bao, initially operated under the name Monaco Technology GmbH. It was later rebranded to Crypto.com, and its platform token, called Monaco Coin (MCO), was also changed to CRO (Crypto.com Coin). With the launch of the Crypto.org blockchain, the company rebranded the token name to Cronos but retained the ticker symbol CRO.

CRO is instrumental in powering the entire Crypto.com ecosystem and acts as the native token on both Crypto.org and the Cronos blockchains.

Cronos appeals to both users and developers due to various reasons. Some of these are:

How does Cronos work?

The Cronos Chain is based on Ethermint, a scalable, high-throughput blockchain framework that is fully compatible and interoperable with Ethereum. This is the main difference between Cronos and Crypto.org blockchains. The latter is not based on Ethermint and therefore does not support apps that are created for the EVM platform and other derivative frameworks.

The Ethermint blockchain framework on top of which the Cronos Chain is based is designed to run vanilla Ethereum as a Cosmos application-specific blockchain. This implementation enables Cronos developers to access all of Ethereum’s desirable features while also taking advantage of the scalability and lower costs associated with the Terndermint-based Cosmos SDK that underlies the Ethermint framework.

Ethermint comes with multiple features such as:

Cronos network relies on Tendermint Core’s Proof of Stake (PoS) engine to achieve consensus. PoS provides that validators stake a portion of their assets in a smart contract to incentivize good behavior while validating transactions.

The benefit of PoS is that it is much more scalable than Proof of Work (PoW) used by several established networks such as Bitcoin, Litecoin, Ethereum, and Bitcoin Cash, among others.

By adopting the Ethermint framework, Cronos adopts the best of both worlds from the Ethereum and Cosmos ecosystems. That is feature-filled EVM-compatible dApps and cross-chain compatibility with Cosmos SDK-based networks. Scalability is also a big attraction to entice dApp developers on the Ethereum network to port their apps to Cronos.

Cronos being an open-sourced blockchain, allows all CRO token holders to participate in its governance. Anyone can make a proposal, fund it and vote for it and others to ensure that it is adopted. Here is the eight-stage process of passing proposals within the network:

The Cronos blockchain introduces innovative features, which include:

As the name alludes, a bridge is a structure that connects two things. In the case of Cronos, its Bridge enables users to seamlessly transfer assets between various blockchains, thereby fostering interoperability.

So far, the Cronos Bridge supports the following networks, all of which are based on the IBC channel:

As a result, it also supports these tokens that are native to the above-mentioned networks:

To take advantage of the Cronos Bridge, you can use any of these supported web wallets:

Cryptocurrency wallets are tools used to store private keys that control a user’s assets on a blockchain. They also facilitate asset transfers between various users. On Cronos Chain, the following self-hosted wallets can send, receive and store CRO tokens as well as be used to interact within the Cronos ecosystem:

The Cronos (CRO) token was initially called ‘Crypto.org Coin,’ but the name was changed to reflect the decentralized nature of the coin and the goal of making Cronos a diverse and extensive network. The token has a total supply of 30 Billion following a decision by Crypto.com to burn 70 Billion in February of 2021.

The remaining tokens, which were created on the Ethereum platform on the popular ERC-20 standards, were ported over to the Crypto.org Chain, but their utility remains the same. Here’s how the CRO token can be utilized across the Crypto.com ecosystem, including within Cronos blockchain:

Note: CRO can also be used within Defi platforms to lend and borrow, earn interest payments and bonuses, as well as cashback when using the Visa-branded Crypto.com card.

Cronos provides gaming developers a software development kit (SDK) through which they can connect their games to the Cronos ecosystem for added functionality. The extra functionality that can be gained by tapping into Cronos includes:

Cronos may only be a few months old, but it is poised to become a big contender in the blockchain space. Here’s why:

Ethereum is currently the leading smart contract platform, but it faces a few challenges that have proven problematic towards its widespread adoption. The shortcomings include high network fees and slow transaction processing times.

Cronos has duplicated the features offered on Ethereum through the Ethermint framework but has adopted the Tendermint Core consensus engine, which uses the more scalable PoS consensus. As a result, the blockchain is much faster, cheaper, and eco-friendlier.

By tapping into the Cosmos ecosystem through the use of the Cosmos SDK, Cronos is able to communicate with other more established networks such as Terra, Akash, and the BNB chain. Interoperability brings more utility to the network, making value transfer and service exchanges amongst multiple blockchains more seamless.

The proof of stake consensus mechanism has proven to be more scalable than its more established rival, Proof of work mining. PoW is what is used by Ethereum and Bitcoin, among others, and contributes to the low transaction processing speeds. Cronos is not only fast but also cheap, two of the main benefits of using PoS over PoW.

Cronos was launched as part of the wider Crypto.com ecosystem, including the popular exchange platform and the parallel Crypto.org blockchain. So far, the exchange serves more than 10 million users across the world, showing an already available user base that can be activated to use the new network. Additionally, Cronos complements the exchange service, enabling it to offer its customers a wider variety of products.

Now that you understand some of the unique features of Cronos, let’s consider where to use it and some of its applications.

Pros and Cons of Cronos Chain

As an innovative blockchain network, Cronos is now pushing the envelope toward making cross-chain interoperability a reality. That is its biggest strength. More crypto projects are launching with a similar vision, but Cronos has a leg up because it is launching as part of a family of other already established products.

Its parent company Crypto.com also runs another parallel blockchain dubbed Crypto.org Chain with limited features. Coupled together, the two blockchains complement one another and also enable Crypto.com to offer more advanced products such as Defi and NFT marketplaces, offering more utility to its userbase.

All in all, Cronos has had a very promising start, but only time will tell whether it achieves its vision of displacing Ethereum, which is currently ridden with scalability challenges.

Cronos is an EVM-compatible blockchain created on top of the Cosmos-SDK launching in November 2021. The network is an addition to the Crypto.com ecosystem running parallel to Crypto.org blockchain.

Cronos (CRO) token is the native utility token on all affiliated Crypto.com entities, which are the Crypto.com exchange, Crypto.org, and Cronos blockchains.

What are the use cases of Cronos?

The Cronos blockchain has several applications, and given that it is EVM-compatible, it mirrors Ethereum’s use cases which include hosting:

What is the difference between Cronos Chain and Crypto.org Chain?

Cronos is an Ethereum compatible blockchain designed to host decentralized applications and smart contracts written on the Solidity programming language. Additionally, since it is based on the Ethermint codebase, it is interoperable with Cosmos SDK-based blockchains on the IBC channel. Crypto.org, on the other hand, is a less generalized platform designed to power Crypto.com’s expanding suite of financial products, such as the Crypto.com Pay.