Intel (NASDAQ: INTC) recently announced the development of the BonazaMine, a one-of-a-kind Bitcoin ASIC processor and notably the company’s first venture into the cryptocurrency mining industry.

When announcing the decision during the recent IEEE 2022 International Solid-State Circuits Conference (ISSCC), which started on Sunday, February 20, and will finish Thursday, February 24, Intel claimed its crypto mining chip is 1,000 times faster than other GPUs.

While in attendance, Intel also demonstrated the BonanzaMine System, which has 300 BonanzaMine ASICs and has a throughput of 40 THash/s while requiring 3600W of electricity. However, it’s worth pointing out that this cannot reach half the performance of Bitmain’s latest mining machine, according to crypto reporter Colin Wu citing a report by wccftech.com.

Whatsmore, Intel, disclosed the technical specifications of its first-generation Bitcoin mining chip, with 40 THash/s while requiring 3600W of electricity. On the matter, Wu highlighted that this might be a 2018 product, he said:

“Intel disclosed the technical details of its first-generation bitcoin mining chip, 40T+3600W, but it should be noted that this may be a 2018 product. The latest second-generation chip has not been disclosed, and the performance may be around 35J/T.”

Furthermore, the machine will have a total of 75 BonanzaMine ASICs handled as a voltage stack of 25 chips deep on each hash board, allowing for input voltages of 8.875 V divided into 355 mV spanning over each combined ASIC group.

Intel also proposes a strategy for increasing mining efficiency by up to 5% while simultaneously reducing IR drop casualties. All boards are equipped with a microcontroller unit that monitors temperature and voltage levels.

“Our blockchain accelerator will ship later this year. We are engaged directly with customers that share our sustainability goals. Argo Blockchain, BLOCK (formerly known as Square), and GRIID Infrastructure are our first customers for this upcoming product. This architecture is implemented on a tiny piece of silicon so that it has minimal impact on the supply of current products.”

Since Intel is showcasing a comprehensive Bitcoin mining system, the advantage of microscopic chip sizes enables for application into smaller crypto-mining systems as this market component currently lacks competing innovations.

Intel has announced neither a launch date nor prie information for the processor or system. Nonetheless, the fledgling crypto business GRIID is Intel’s first client to use the new crypto chipset announced earlier this month. 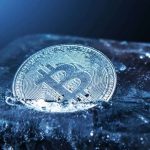 Bitcoin's next bull market may not begin until late 2024, predicts Huobi co-founder