On Wednesday, July 13, the Pentagon said the U.S. Air Force successfully tested a pair of Lockheed Martin (NYSE: LMT) hypersonic missiles. Apparently, the test was done off the California coast this week, as initially reported by Reuters.

The Air-Launched Rapid Response Weapon (ARRW) is located under a plane’s wings, like conventional missiles; however, the Operational Fires program is its ground launch counterpart, which allows rapid and precise engagement from afar.

These tests come amid worries that the U.S. is falling behind Russia and China in hypersonic weapons developments, which has now become a renewed superpower arms race. Shares of LMT finished the trading session yesterday down 1.24% despite the successful test and the fact that the firm’s products are independent of consumer confidence and behavior.

LMT closed below the 20-day and 50-day Simple Moving Averages (SMAs), confirming the negative short-term trend as the stock has been down 12.76% in the past 3 months. Meanwhile, a possible support zone has formed at $404, whereas resistance has been noted at $408.11.

On the other hand, analysts rate the shares a moderate buy, predicting that the average price in the next 12 months could reach $501.92, 23.02% higher than the current trading price of $408.

Defense contractors are seemingly shifting their focus towards developing and improving hypersonic missiles. Currently, the Air Force’s fiscal 2023 budget plans to ask for $577 million next year to ramp up prototyping related to ARRW weaponry.

Further, Lockheed would like to see their hypersonic weapons launched by a High Mobility Artillery Rocket System (HIMARS), a weapon system sent to Ukraine, possibly due to the improved utilization of the systems.

Nonetheless, LMT seems to be uniquely positioned to take advantage of the new arms race that is heating up between Russia, China, and the U.S., each successful deployment of their novel weapon systems, will bring them that much closer to new contracts with the government and create new value for their shareholders. 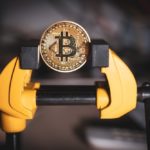