Terra (LUNA) had been doing well in the previous three months, with its price continuing to grow as the DeFi asset broke into the top ten cryptocurrencies by market capitalization despite the bearish sentiment in the cryptocurrency market.

Nonetheless, after a recent downturn, LUNA witnessed a significant loss of more than $10 billion on May 10, falling from $21.01 billion to $10.96 at the time of writing, according to statistics from CoinMarketCap.

Rekt Capital, a cryptocurrency trading expert, has spotted a bearish divergence that is now taking place. He noted:

“LUNA has dropped over -60% since breaking down from the red market structure, in fact dropping much lower than the blue levels.”

Why has LUNA dropped so much?

Notably, on May 10, crypto trading platform Binance announced it suspended withdrawals of LUNA and UST tokens due to “network slowness and congestion.”

The company said in a statement, that it would reopen withdrawals for these tokens once it deemed the network to be stable and the volume of pending withdrawals has reduced.

As a result of the liquidation of its Bitcoin holdings to maintain the peg, the LFG has drained its reserves. Interestingly, on May 6, the Luna Foundation surpassed Tesla as the second-largest corporate holder of Bitcoin.

How things will play out from here is unclear. Investors will be keeping a close eye on Bitcoin as if it continues to drop; LUNA will likely be impacted; however, given that Terra was trading as high as $95 in the last month, some traders may be looking at this drop as a buying opportunity. 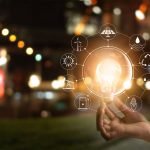