Although Bitcoin (BTC) continues to struggle in an attempt to reclaim the highs of last year, the latest data indicates that addresses with at least one BTC is on the rise.

As of May 16, 2022, the number of Bitcoin addresses with one Bitcoin and above hit an all-time high of 841,224, data provided by blockchain analysis platform Glassnode indicates.

The surging number of holders has coincided with Bitcoin’s drop of over 55% from the all-time high of almost $68,000 registered in November last year.

Who increased their BTC holdings?

Even with the high level of volatility, buying one Bitcoin is still prohibitively costly for most retail investors. Thus, the price drop may have prompted large investors known as whales to increase their holdings of the asset when its value fell.

However, despite the whales accumulating a significant share of the asset, most Bitcoins are circulated among retail investors who own portions of the flagship crypto.

Due to Bitcoin’s anonymity, it is near impossible to single out the specific owners of the addresses holding at least one coin. However, most whales are usually associated with large entities like companies and exchanges.

Worth mentioning is that the data on addresses with at least 1 BTC does not reflect the number of people holding the amount. In some cases, the number of wallet owners differs considerably, and some people may have access to wallets with slightly lower balances.

Bitcoin accumulation by whales can also be interpreted as an indicator that the asset is increasingly being viewed as a store of value amid the network’s growth. The concept of Bitcoin as a store of value, or digital gold, has been explored on numerous occasions, especially with the rising inflation.

In general, a drop in prices usually presents a buying opportunity because selling might result in losses, as highlighted by Glassnode. As of May 16, the platform indicates that the number of Bitcoin addresses in profit for the seven-day moving average hit a 21-month low at 23,925,555.190.

Notably, with Bitcoin making losses, investors might also be withdrawing their holding from exchanges into private wallets, awaiting a selling opportunity. 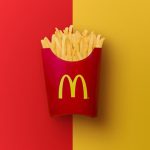 How will McDonald's stock react after the fast food giant pulls out of Russia?