Head of derivatives research at securities brokerage firm Weeden & Co, Michael Purves, has said despite the ongoing bitcoin rally, fewer people are willing to elevate the asset to new record prices over the last six months.

Speaking during an interview with TD Ameritrade Network, Purves noted that the enthusiasm witnessed at the start of the current bull run has slowed down, considering the digital asset has been trading in the range of its all-time high price.

He expressed that bitcoin’s price movement in the last few months is a signal of unwillingness among investors to break new price levels. Notably, bitcoin has experienced a series of record prices in the last six months.

“And that to me, is a classic indication of fading, upward momentum on a stock or in this case Bitcoin that has put through an enormous rally, but the rallies showing signs that there’s fewer people willing to take it up to the level with the sort of enthusiasm that they did in the first parts of the rally,” said Purves.

He, however, clarified that the price movement is not a judgment on bitcoin’s position in the financial world. Purves stated the development should not determine bitcoin’s ability as an intrinsic value asset or a currency.

Over the six months, bitcoin has undergone a series of record price levels, with the all-time high emerging on April 14, 2021, to trade at almost $65,000.

By press time, the asset was trading at $51,850, plunging 5.36% in the last 24 hours, according to data provided by CoinMarketCap. The price marks bitcoin’s fourth day of weak market action.

Watch the video: Michael Purves on the battle between Bitcoin bulls and bears 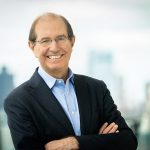