People explore new ways to mine cryptocurrencies amid the growing popularity of these digital assets. A YouTuber shares how he modded his Nintendo Game Boy to enable it to mine bitcoin.

In a video, the pseudonymous vlogger shared that he decided to get into the bitcoin mining game following Elon Musk’s announcement that Tesla is accepting the flagship cryptocurrency as payment.

Unfortunately, he did not find decent GPUs when he checked online stores, so he decided to be creative with the gaming hardware that he already has.

Modding Game Boy to mine bitcoin

He opted to use an original and unmodified Game Boy and explained how to set up the device given that it has no Wi-Fi access and mining Bitcoin requires connection to the internet.

“To mine, we need to somehow communicate with a Bitcoin node that communicates with the bitcoin network and will give us the data required for mining. We also need it to announce our block in case we manage to mine one, but the Game Boy doesn’t have Wi-Fi or anything, so how can we get it to communicate with the Bitcoin node?”

He says that the solution is to connect the Game Boy to a computer using Raspberry Pi Pico.

“Luckily the Game Boy has a link port, which is normally used to perform Pokemon trading and other highly important things, but for mining, we can use it to communicate with a computer. To build an adapter from link cable to USB, I decided to use the Raspberry Pi Pico, as it makes it really easy to implement all kinds of IO protocols, and I was really looking forward to making use of that.”

People who have a Nintendo Game Boy at home can follow the setup to enable their gaming device to mine crypto. Unfortunately, they won’t likely produce a single bitcoin in their lifetime.

The game console can only pump out 0.8 hashes per second. In comparison, the current-gen ASIC miner can pump out around 100 terahashes per second, which means that the Game Boy’s hash rate is 125 trillion slower.

At this rate, it will take a few quadrillions years to mine one bitcoin using a Game Boy.

Watch the video: Mining Bitcoin on the Nintendo Game Boy 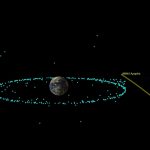 Earth safe from Apophis asteroid for the next 100 years: NASA