Bitcoin prices have been retreating during Monday morning’s Asian trading session after failing to top $50,000 over the weekend.

On some exchanges, the price of Bitcoin may have actually reached that psychological $50K barrier. Still, according to Tradingview.com, using prices from the world’s largest crypto exchange, Binance, it only managed to reach $49,850 on Sunday, Feb. 14.

Since then, there has been a sharp 7% correction dropping prices to current levels at a little under $47,000 at the time of writing.

Industry analysts and observers have noted that the $50k level will have been huge for retail traders and investors, which tend to follow rather than lead with price discovery.

Is a Bitcoin correction coming?

Several crypto traders and industry analysts have hinted that the correction could escalate as day traders seek short term gains. Blocktower Capital CIO Ari Paul acknowledged what he is calling a “brief and minor correction” but is still convinced we are in the midst of a “violent bull run”;

The next level of support below the current one is around $44,250. BTC has already corrected once by 30% at the end of January, and there are likely to be more in the current market cycle. A similar move this time around could drop prices back to $35K or lower.

There is still massive momentum for Bitcoin and crypto at the moment, with PayPal’s CEO reporting huge increases in app usage since the payments giant enabled crypto purchasing.

JP Mogran’s Chief Operating Officer, Daniel Pinto, told CNBC that the bank is likely to get involved when it sees demand for the asset class;

“If over time an asset class develops that is going to be used by different asset managers and investors, we will have to be involved. The demand isn’t there yet, but I’m sure it will be at some point.”

The total market cap hit a peak of $1.5 trillion over the weekend, which is pretty much double what it was on January 1. At the time of writing, it had retreated to $1.4 trillion, and there could be further losses before the next leg up.

Crypto markets are still relatively small compared to some of the world’s largest corporations, so there is massive room for growth. According to Companiesmarketcap.com, Apple, Microsoft, and Amazon are all larger by market cap than the entire crypto market.

Bitcoin alone is between Tencent and Tesla, with a market cap of around $870 billion. 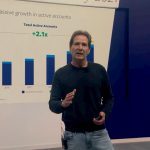