For a long time, the correlation of major cryptocurrencies such as Bitcoin (BTC) with established asset classes has been studied by traders and investors, including its correlation with gold, which has recently seen an increase.

As it happens, last week the correlation of Bitcoin with gold reached its highest level in more than a year, crypto market analytics platform Kaiko Data stated in its data debrief published on October 3.

According to the authors of the debrief, both the flagship digital asset and the precious metal have suffered significant declines this year:

“After benefiting heavily from the Russia-Ukraine conflict in the first quarter of the year, gold has lost all its gains and is currently down 10% YTD. Bitcoin has also declined double-digits this year dragged down by global monetary policy tightening.”

On top of that, “gold has failed to act as a safe-haven asset i.e. an asset that is expected to retain or gain in value during periods of economic downturn,” in spite of “core inflation remaining persistently high.”

Bitcoin and gold vs. dollar

“Over the past year, Bitcoin has been mostly uncorrelated with gold, with its correlation oscillating between negative 0.2 and positive 0.2. However, as the U.S. Dollar continues strengthening, negatively impacting both crypto and gold, the correlation between the two assets has shifted.”

At press time, Bitcoin was trading at $19,917, up 3.84% on the day at the same time as the global crypto market capitalization has grown by 3.05%. That said, the BTC price is still down 1.25% compared to the previous seven days.

As things stand, the market cap of the largest cryptocurrency by this indicator at the time of publication stood at $381.79 billion, as per CoinMarketCap data.

At the same time, some analysts are predicting bullish momentum for Bitcoin, provided it breaks the resistance area of $20,100 – $20,340, while the supply of BTC on exchanges has dropped to a four-year low.

Others have noted historically poor Bitcoin performance during October’s bear markets in previous years, wondering whether this signals the same for October 2022, as Finbold earlier reported. 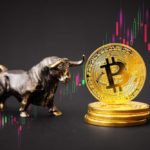