Based on Bitcoin Moving Average (MA) analysis, the digital asset is now preparing for a bullish run. By press time the asset was trading at $10,522, a figure above the key 100MA and 200MA.

Compared to the 100MA Bitcoin price change is about 8.45% while the change for 200 MA stands at 44.46%. Analysts believe that the positive changes all point to a bull market that has been elusive in recent weeks.

In recent days, Bitcoin’s price has appeared to be gearing up for another shot at the $11K. Although Bitcoin price slumped significantly at the end of last month analysts have given a positive outlook for the asset.

In a tweet, a crypto figure known as Crypto Hamster holds the view that:

“One of the signatures of a bull market is when the price is above major moving averages and the longer scale of the moving average, the lower it is placed, e.g. on a weekly time frame: Price>50MA>100MA>200MA”

From a bullish perspective, a crucial breakout has to maintain above $10,500. Once the price of Bitcoin maintains this area for support, the 100MA can be classified as support. Such a move would also warrant further upwards momentum towards $11,500 and the possible start of a bull market.

However, the support levels are still on the table considering the breakout is uncertain after Bitcoin posted the biggest monthly price drop since March. Bitcoin fell by over 2.5% within 24 hours while the monthly drop was by over 10%.

The slump began on September 29th when Bitcoin price abruptly by a 3% drop after a rejection around the $11,000 support level. The drop has led to mixed reactions from cryptocurrency traders.

Back in March, prices fell by nearly 25% as the coronavirus-induced crash in the global equity markets triggered a global dash for cash, sending the dollar higher.

A section of analysts expects riskier and risk-off assets to grow as the US Congress plans to resume talks to pass the second coronavirus stimulus package. 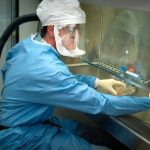