Despite Bitcoin’s uneventful third halving which may have caused a fall in open interest and trading volume, current data suggests that bullish sentiments for the asset are on the rise again.

The new data released by digital asset trading platform Okex in collaboration with the online crypto data analytics platform Skew shows a sharp drop in open interest from a maximum of $863 million to $773 million as the last recorded yesterday on May 12, 2020.

Volume has also reduced from $7 billion on 11 May to $3.7 billion yesterday. This is still significantly higher than the lowest recorded since April though, which is $1.3 billion. It is also well above the average since that time, which stands at exactly $3 billion.

In Spite of the severe crash in open interest and volume, bullish sentiments for Bitcoin seems to be on the rise all the same. This is evident from the tightening range of price movement in the last 24 hours.

Although it has not been able to break above $9,000 up to the time of reporting the data, it has managed to stay around $8,900 with no wild downward swings and still tops major cryptocurrencies on the daily Token Index Board.

The price had risen from $8.700 to $8,900 yesterday when the Open Interest took a hit, which also further confirms the return of bullish sentiments, the report says.

This has, however, not been able to secure retail investors’ confidence in further price increase as the BTC Long/Short Ratio took a dive from yesterday’s high of 1.18 to current 0.93 at the time of publishing the data. Although the market will be under pressure from sellers for the next several weeks, the short term momentum remains bullish.

Inefficient miners may give way

Bitcoin halving essentially cuts Bitcoin block reward (miners’ incentive) by half, thus reducing the supply of the cryptocurrency. Although this is seen as good for the value of the asset over time and previous halvings have proven it to be so, inefficient miners may find it difficult to cope as the reward has been cut by half, coupled with the insignificant price gain following the event.

Though the sentiment is bullish at the moment, it is yet to be seen what happens in the next several weeks as selling pressure mounts. 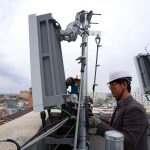 Ericsson registers up to 100% increase in 5G network traffic