The Cardano (ADA) blockchain ecosystem has continued its tremendous growth since undergoing a significant upgrade in September 2021.

This growth can be measured in terms of new features and updates, as well as buyer interest, with more than 2,000 new holders being added daily over the course of the past 30 days.

Interestingly, Cardano whale transactions hit a 4-month high as prominent players bought the dip. On May 13, Cardano whales were the most active they had been since January, when the ADA price bottomed out at $0.40 on May 12. In particular, ADA saw 1,085 transactions exceeding $100,000 in value, as it appears interest is there from both large and retail investors.

Notably, Cardano added over 70 smart contracts a week as more developers onboarded the blockchain. The largest Proof-of-Stake (PoS) blockchain added 283 Plutus (a Cardano-based smart contracts platform) scripts, going from 2,400 on April 8 to 2,683 on May 8.

Cardano is now preparing for its next hardfork event, which will be the Vasil hardfork and is slated to take place in June 2022. The most recent development comes at a time when Cardano is preparing for this event. Its purpose is to expand the protocol and dramatically enhance its transaction throughput and, with it, volume and liquidity.

At the end of the month, the network added 400 new ADA-based projects and about 100,000 wallets, Finbold announced, after expanding the number of ADA wallet holders to more than 3 million in February.

Meanwhile, Cardano has been trading bearishly in recent days, along with the rest of the cryptocurrency market. Namely, its price at press time is at $0.526, which is up  0.92% in the last 24 hours although down 9.47% across the last week, according to CoinMarketCap statistics. 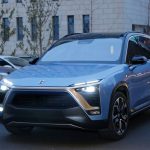 Nio shares up 5% as EV maker debuts in Singapore