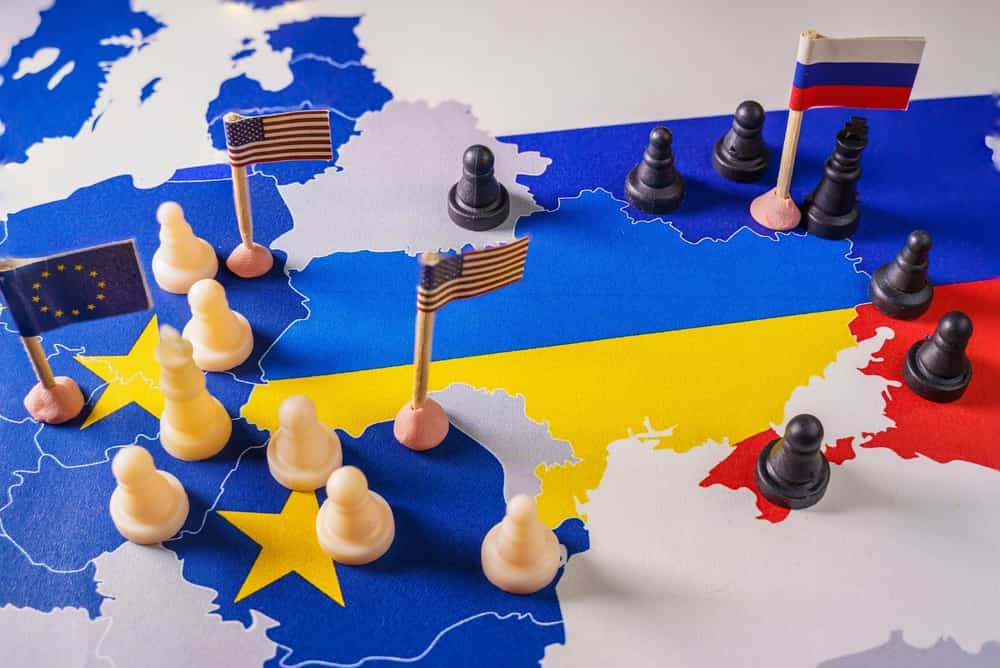 Since the onset of war in Ukraine, the country continues to receive massive aid from allied nations to repel the unprovoked Russian invasion. The need to support Ukraine has resulted in countries committing a significant share of their economic output towards managing different areas disrupted by the war.

Elsewhere, relative to the size of the economy, the U.S. aid commitment to Ukraine ranks fourth at 0.2% of the GDP, while Lithuania is fifth at 0.2%. Germany trails in the 14th spot with a share of 0.06%, trailing Estonia by over 13 times. Data on the commitment to provide Ukraine with aid is retrieved from Ukraine Support Tracker by Kiel Institute For The World Economy.

Following Russia’s invasion of Ukraine, countries resolved to support the country without direct involvement in the war to maintain stability in the region.

It is worth noting that a significant share of the aid is allocated through traditional foreign donor channels like money towards urgent support, health services and food assistance to Ukrainian refugees impacted by the war.

The significant inflow of aid into Ukraine is part of the donors’ recognition that the fallout of the conflict might have consequences on the region and possibly in other parts of the world without support. However, of interest will be the sustainability of the aid in the long-term, especially in the absence of domestic legislation and considering that the support is partly eating into the donor’s GDP.

Some countries have altered their priorities to meet the humanitarian impact of the war. Interestingly, despite having smaller budgets, Baltic region countries are leading based on their share of GDP in aiding Ukraine.

In light of the fact that the area is at risk of experiencing instability as a result of the conflict, this difference in spending may be seen by countries investing in the war closest to the action.

The U.S. leads western countries in donating towards Ukraine

The U.S. is trailing in the aid despite the country having the highest military budget, being the largest arms exporter and, coincidently, the largest aid donor.

In a bipartisan move, the U.S. Congress also passed a $40 billion Ukraine aid package. The funding will basically go towards military and security assistance, along with funding for economic and humanitarian needs.

Overall, countries contributing to Ukraine are likely to increase, considering that different organizations are carrying out varied mobilization exercises to pool funds.

Besides the traditional fiat currency donations, some donors are also leveraging digital currencies to aid Ukraine. For example, after winning the Eurovision Song Contest, Ukrainian band Kalush Orchestra resolved to sell their trophy in partnership with Estonia-based crypto firm WhiteBIT. The funds were channeled towards helping Ukraine.

Elsewhere, countries like Germany committed to supplying Ukraine with weapons to assist in repelling the Russian forces. Interestingly, the pledge came against Germany’s long-standing ban on weapon exports to a conflict zone.

However, the country has come under scrutiny for delaying the release of promised weapons in what is perceived as hesitation towards getting involved in the war. In this line, Germany’s Chancellor Olaf Scholz has come under heavy pressure to keep the promise of supplying weapons to Ukraine after legislators approved the move.

The hesitation of direct involvement in the war can be seen as a move to avoid provoking Russia. Therefore, most European countries have resorted to sending their aid through the EU while pushing for the conflict’s resolution.

Criticism of donating to Ukraine

However, the commitment to support Ukraine has also faced criticism from activists who warn against abandoning other challenges facing the world.

Some of the activists call on donors to meet their other obligations regarding factors like poverty and climate crisis. There have been calls to allocate resources towards Ukraine and not simply by militarizing aid or shifting budget items from other global development challenges.

Furthermore, there are concerns about whether the aid will be used. For instance, concerns exist regarding if all military assistance can be put to good use. It is not clear if the high-tech military equipment will be used, considering that most Ukrainians haven’t trained with them.

Given that the onset of the war has led to global economic disruptions, impacting security, energy supply, food production, and exports, some of the aid will be channeled towards keeping the Ukrainian economy afloat.