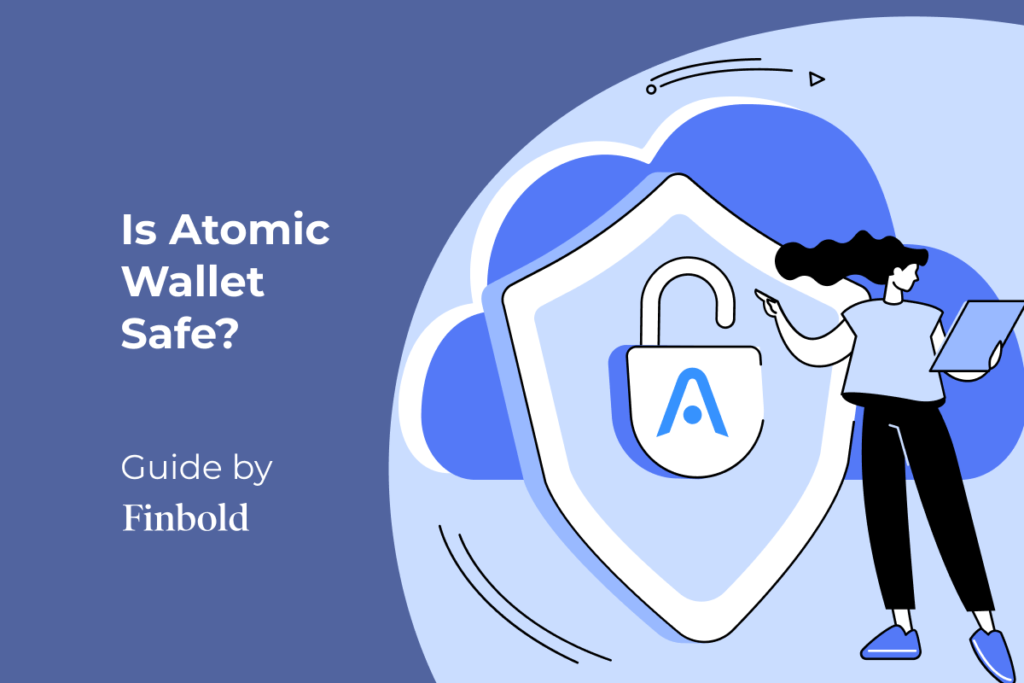 In this guide, we will examine the security of Atomic Wallet, a cryptocurrency wallet to manage and exchange Bitcoin, Dogecoin, Ethereum, as well as over 500 other coins and tokens. In particular, we will analyze its decentralized features, password, 12-word seed phrase, and encryption, amongst other things.

Atomic Wallet is a decentralized cryptocurrency wallet based in Tallinn, the capital of Estonia. It was founded in 2018 by Konstantin Gladych, who was previously the co-founder and CEO of another well-known cryptocurrency platform, Changelly.

Specifically, the wallet provides its users with the ability to purchase, stake, and earn cryptocurrency. The non-custodial wallet also offers support for more than 500 different currencies and tokens, all in a sleek yet straightforward interface, while providing a high degree of protection for its users to secure their cryptocurrency holdings, which will be the primary focus of this guide.

Note: To learn more about the wallet itself, including its various features to buy, stake, and earn, check out our in-depth Atomic Wallet review.

Atomic Wallet’s reputation in the industry

Atomic Wallet has built a credible reputation since its inception in the cryptocurrency space. For instance, it is trusted by more than 3 million people across the globe, with a ‘Great’ rating on Trustpilot with over 11,000 reviews in addition to its average rating above four stars on both the App Store and the Google Play store.

By the same token, Atomic is supported by over 40 distinct blockchains and has raised its employee count to over 50 since 2018 as it continues to make strides in the industry.

Not only does Atomic combine cutting-edge technology, design, and security in a single wallet, it also offers a user-friendly platform that is entirely secure, enabling users to keep track of the assets they have invested and store them in a safe, decentralized space, which is in line with the spirit of cryptocurrency.

Since the Atomic Wallet team cannot have access to your transactions, keys, or backup phrase, it offers users three key security and privacy benefits:

Watch the video: Overview and Advantages of Atomic Wallet

The Atomic Wallet is distinguished by the fact that all of your funds are securely encrypted in the blockchain, and by using your seed phrase, only you can get access to your funds.

Cold wallets are those in which all passwords and data are saved on the user’s device rather than a server, eliminating custody issues and the potential of money being lost via centralized services.

Atomic is an example of such a wallet. The most significant risk of Atomic Wallet is that you will lose your backup phrase or if you send it to someone else accidentally.

Atomic has a number of beneficial features in order to keep its users safe, firstly since it is a non-custodial wallet.

Watch the video: How to protect your crypto wallet?

Atomic also holds advantages of holding cryptocurrency on a centralized exchange or wallet such as:

As a result, many users are turning to decentralized wallets such as Atomic to buy and store their cryptocurrency in order to evade uncertainty and manage their own assets.

Atomic Wallet, in general, protects its users and the security of their cash with four critical security measures that complement its decentralized and privacy-preserving features.

To begin using the wallet, the user must establish a password, which is necessary to confirm transactions, to access the list of your private keys, and to serve as the main protection against unauthorized use by unwanted individuals. The password should be unique to the wallet and must not be shared with anyone else.

If you forget your password, you may use the 12-word Backup Phrase, which is the second security level in the Atomic Wallet Security system, to recover your funds.

If you possess your private keys and keep them in a non-custodial wallet like Atomic, the software encrypts them on your computer or smartphone. As a result, your transaction is automatically signed using that key.

When you first set up your wallet, Atomic produces a 12-word backup phrase for you. Due to the fact that each word is unique, this phrase is also referred to as a recovery phrase, a seed phrase, or simply a seed.

The 12-word backup phrase is produced at random and will assist you in regaining access to your Atomic Wallet at any point in time. It is critical not to lose this seed phrase; thus, it should be kept somewhere safe and inaccessible to others.

Each of your assets has its own private keys, but the 12-word phrase controls them all. This phrase gives you permanent access to your funds and is hence the most critical aspect of wallet security.

Note: It is recommended that you even write it down or print it off on a piece of paper to keep it safe. Check our our complete cryptocurrency wallets guide to learn more on how to keep your digital assets safe.

Since the 12-word phrase is encrypted on the wallet’s device, Atomic has no access to it and does not keep information on its systems. This implies that you have total control over your funds since no one else has access to them.

Every piece of information kept on the user’s device or sent while engaging with blockchains is completely encrypted.

AES is a symmetric block cipher that has been adopted by the United States government to safeguard classified information and is used worldwide to encrypt sensitive data in software and hardware successfully.

TLS is a protocol that protects the privacy and integrity of data between two interacting apps. Whatsmore, it is one of the most commonly used security protocols utilized by Web browsers and other applications that need data to be securely transmitted across a network, such as file transfers, VPN connections, and instant messaging.

If you have any issues with your wallet, you can contact their support which is available 24/7 to deal with an employee without any issues.

You use Atomic ID, which is a unique anonymous identifier that is strictly anonymous. To reiterate, Atomic does not have access to your addresses, history, amounts sent and received, or any other private information.

Nor does it have access to any of your funds, private keys, or backup phase. The support staff will recommend Atomic ID just to streamline and clarify the investigation of your issue.

Users with problems may consult the commonly asked questions in the Help Center.

You may also email [email protected] if you have questions concerning the wallet that aren’t covered in this section of the site.

On the whole, we consider Atomic Wallet to be a secure cryptocurrency wallet to use to buy, stake and store your crypto. In the end, the safety of your cryptocurrency is entirely in your hands. As previously mentioned, Atomic, being a decentralized non-custodial wallet, does not keep any data on any of its servers, nor does it store or have access to any private keys.

Consequently, the users are responsible for keeping their password and 12-word backup phrase secure. By exercising caution and vigilance with your mnemonic seed, private keys, and master password, you can prevent hackers from gaining access to your assets.

Yes, you may buy Bitcoin on Atomic Wallet in addition to other digital assets like Dogecoin, Ethereum, and Shiba Inu. You may make purchases straight from your wallet by using your bank card.

Atomic Wallet allows users to purchase Shiba Inu (SHIB) and earn up to 1% cashback on each purchase, in addition to managing over 500 other currencies and tokens, 13 of which can be staked.

What happens if I lose my device with Atomic Wallet installed?

Users are provided with a 12-word backup phrase which is the only way to regain access to your wallet if you ever lose your device or break it. It is imperative you don’t lose this phrase.

Yes, Atomic Wallet is a non-custodial decentralized wallet. It includes a private password, encryption, and a 12-word seed phrase that is stored on your device, ensuring that you maintain total control over your assets. To the Atomic team, users remain anonymous, as do their data and transaction history.