Financial stocks dropped during Q3 2022 due to macroeconomic worries surrounding the war in Ukraine and rising energy prices in Europe and the UK. Additionally, the climbing interest rates piled on worries for market participants looking to get exposure to the financial sector.

Historically, higher interest rates improve the interest margins of banks but lower the amount of equity and debt offerings. As a result, Megabanks could be at a higher risk in such an environment, and a recent ABC Australia story, which indicated that a major international bank is at the brink of collapse, brought into question the survivability of Credit Suisse Group AG (NYSE: CS).

Also, Credit Suisse currently holds roughly $2.8 trillion in assets, making it a significant player in the banking sector. Meanwhile, the bank’s CEO did little to calm the nerves of investors stating that the bank is at a ‘critical moment’ and not much can be disclosed.

Graham Stephan, a real estate investor, pointed out on Twitter that the bank may be in serious trouble.

“Credit Suisse’s credit default swaps (CDS) costs have hit the highest level since 2008! A  CDS is essentially an insurance purchased against a potential default.”

Year-to-date (YTD), the shares collapsed by 60.48%, with both negative short-term and long-term trends. CS is one of the lesser-performing stocks in the Capital Markets industry, where 86% of 203 stocks in the same industry do better.

Over the past month, shares traded from $3.83 to $5.68, well below all moving averages, with technical analysis indicating a resistance line at $5.20.

The Sole TipRanks analyst covering CS rates it a ‘moderate sell,’ with the average price in the next 12 months reaching $4.50, 14.80% higher than the current trading price of $3.92.

In addition, Credit Suisse follows other European major banks with a low price-to-book valuation, which is a flashing a warning signal according to Alasdair Macleod, head of research at Goldmoney. Furthermore, Macleod worries that a failure of one of these banks could lead to systemic risk of others following suit.

On the other hand, some analysts believe that a potential failure of CS would not cause a Lehman moment, referring to the implosion of the US financial firm Lehman Brothers, which pulled the entire market down.

In its current form, Credit Suisse may not exist for long, and a potential split or divesting of certain businesses and assets looks inevitable. Market participants have taken note of the troubles brewing in the bank and abandoned the share in droves, potentially making a smart decision. 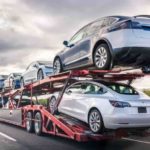 Tesla delivers a record number of vehicles in Q3; Can it fuel a trend reversal for TSLA?