Bitcoin prices hit their highest ever levels over the weekend, topping $60,000 per coin for the first time ever.

Bitcoin has reached another milestone high when prices climbed to $60,900 on March 13, according to Tradingview.com.

The asset remained over the $60k price zone for most of the weekend but has begun to correct during Monday morning trading in Asia. At the time of writing, BTC was trading at just below $58,000, a gain of over 15% since the same time last week.

If the correction deepens, support lies at the $57,500 level, which is still higher than it has been for most of the year.

On the upside, however, Fibonacci levels suggest a move high could find resistance at around $68k, according to technical analyst ‘CryptoFibonacci’.

Looking at Fibonacci extension levels on the long-term yearly view, ‘CryptoHamster’ has predicted an all-time high in this cycle of $250,000 if history rhymes.

Looking at fundamentals, analyst Willy Woo suggested that institutional funds could have been taking profits recently as the first quarter of the year comes to an end.

“We saw a lot of dumping by whales … which gives me the impression of newer hedge funds rebalancing and taking profits; end of quarter window dressing zone. Could explain it. This cycle is quite unlike previous ones due to institutional money.”

Another interesting aspect is exchange outflow which has continued as BTC has moved off crypto exchanges and into storage, custody, or institutional funds.

Grayscale’s most recent update revealed that the firm now has over $44 billion, or 2.4% of the entire crypto market capitalization, in assets under management. Of that total, 84% is held in the Grayscale Bitcoin Trust.

The big Bitcoin move has pushed the total market cap to a record high of $1.88 trillion over the weekend according to cryptocurrency tracker – CoinCodex. Since the beginning of 2021, the crypto market has grown by 132% to current levels.

Following a weekend high of $1,930, the number two digital asset Ethereum has retreated a little today, falling back to around $1,845 at the time of writing.

Most digital assets are currently pulling back from their weekend highs as crypto traders take profits. Binance Coin, the third largest digital asset has dropped 3.5% on the day to $260 while Polkadot has remained flat over the past 24 hours at $37.4. 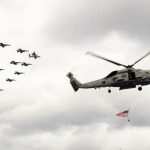 Fraudster collected $280k in payments from the U.S. Department of Defense