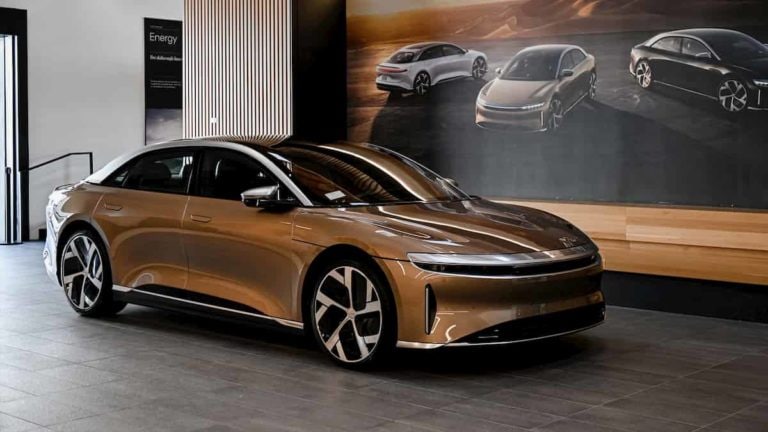 Electric vehicle manufacturer Lucid (NASDAQ: LCID) is set to release its fourth-quarter results on February 28, 2022, and investors will be keen on the company’s production numbers that will likely reflect on the stock’s future outlook.

The EV manufacturer is hoping to follow the footsteps of Tesla (NASDAQ: TSLA) by focusing on building large and expensive EVs to help maximize revenue, reduce scale costs and build a brand reputation.

After hitting the all-time high in November last year, LCID has slipped into a corrective pattern. The slip has coincided with Lucid Motors’ first Lucid Air deliveries.

Although the stock is trading almost 50% from an all-time high, it appears to have found support around the mid $20s range. The volatility has accelerated with the stock trading below the 200 Simple Moving Average (SMA).

Over the last 30 days, the LCID price has been ranging between $37 and $25, which can be considered a wide range. This is an indicator that investors might find some resistance above the current price. Over the same period, while stocks of several EV manufacturers plunged significantly, Lucid’s is among the most hit, dropping 35% on a year-to-date basis.

However, the gains made over the past year are also evident amid the ongoing volatility considering the trading volume has embarked on a minor surge. At the same time, the stock has been a victim of volatility affecting growth sectors like electric vehicles amid an escalation in geopolitical tensions between Russia and Ukraine.

Furthermore, a subpoena from the SEC has further complicated the stock’s growth. In December, regulators were keen to review Lucid’s specific projections and statements.

In general, investors will concentrate on the financial result considering that LCID growth in 2021 was very promising.

The company made critical strides like obtaining the Environmental Protection Agency ratings to deliver its first sedan of Lucid Air Model. Lucid has boosted its brand value significantly among investors and consumers, leading to optimism around LCID.

The stock might find a boost based on the company’s outlook for 2022 when it is expected to announce its progress on the mass production of Lucid Air Touring and Lucid Air Pure. Notably, the two models are meant to offer price competitiveness. LCID will likely stage an upward movement if the production figures are solid.

Elsewhere, according to five Wall Street analysts, the average Lucid 12-month price target has been set at $36.50 with a high forecast of $57. The analysts are projecting low estimates of $16. Based on the average price projection, Lucid will likely surge 37.27% from the current $26.59.

A majority of the three analysts recommend holding LCID while one is for selling.

In general, 2022 will be a big test for Lucid, and if the company lives up to its promises, the stock might benefit positively. Therefore, is the results are positive, the stock will be in a strong position to align with the analysts projections.