Crypto lending platform Nexo co-founder Antoni Trenchev has projected that bitcoin might hit the $100,000 mark within a year backed by factors like increased adoption.

Speaking to Bloomberg Technology, Trenchev noted that the adoption of bitcoin as legal tender in El Salvador would act as a key catalyst with other countries likely to follow suit.

According to Trenchev, the adoption by the South American country has acted as a substitute to slowed institutional investment in bitcoin.

He notes that although El Salvador is a small country, bitcoin’s adoption is a strategic vote of confidence in the cryptocurrency. He projects that most Latin American countries will likely adopt bitcoin as a currency.

Notably, the bitcoin 2021 rally was mainly inspired by institutional investors. However, after electric vehicle manufacturer Tesla (NASDAQ: TSLA) suspended bitcoin payments over environmental concerns, the adoption has slowed down. Furthermore, the increasing regulatory crackdown in China saw the asset plunge by almost 50% from the $64,800 all-time.

Trenchev also attributed his prediction to activity around bitcoin’s leverage account. According to Trenchev:

“A couple of factors, the leverage accounts have blown. There’s basically no leverage in the system to build up again, and this obviously bumps up the price. We now have entire countries accepting bitcoin and adopting gets this legal tender.”

Elsewhere, Professor of Applied Economics at Johns Hopkins University Steve Hanke warns that the country’s economy will collapse. He calms that criminal elements are behind El Salvador’s decision to legalize bitcoin, terming the move as economic stupidity.

Watch the video: Why Nexo’s Trenchev Sees Bitcoin Hitting $100K in a Year 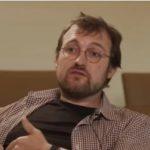