After weeks of turbulent price movement, the cryptocurrency market has turned green, with Bitcoin (BTC) leading the recovery charge by showing signs of stabilizing above the crucial $30,000 level.

Bitcoin’s short-term positive price movement is influencing the general cryptocurrency market, which has attracted a capital inflow of $70 billion in the last 24 hours, a potential indicator that investors’ confidence might be rising.

As of June 6, the total crypto market capitalization stood at $1.29 trillion, a growth of 5.7% from the last 24 hours when the value stood at $1.22 trillion as per CoinMarketCap data.

Overall, the market cap has lost about $1.6 trillion from the all-time high recorded in November last year. Over the period, the market capitalization has plunged by over 55%.

Additionally, the total cryptocurrency trading volume has also spiked by over 44% in the last 24 hours. As of June 5, the value was at $42.7 billion shifting to $61.8 billion on June 6.

After attempts to sustain its price around the $30,000 level, Bitcoin has managed to break the resistance, trading at $31,300 with gains of almost 6% in the last 24 hours. The flagship cryptocurrency has gained over 2% in the last seven days.

For Bitcoin to embark on an upward trajectory, some crypto analysts had opined that the asset needed to flip the $30,300 level to establish it for growth. As reported by Finbold, prominent crypto trading expert Michaël van de Poppe stated that if Bitcoin flipped the level, it would be in a good position to advance towards $31,800. According to Poppe:

Despite the recent dip in cryptocurrencies, institutions and experts have maintained a bullish outlook. For instance, senior commodity strategist at Bloomberg Intelligence, Mike McGlone, believes that cryptocurrencies will likely outperform all other asset classes once the current bear market cools down.

The strategist has previously maintained that Bitcoin will likely trade at $100,000 by 2025.

Besides Bitcoin, among the top ten cryptocurrencies by market capitalization, Cardano (ADA) is leading in gains over the last 24 hours and seven days at 12% and 22%, respectively.

ADA, which ranks as the sixth-largest cryptocurrency, is trading at $0.6. 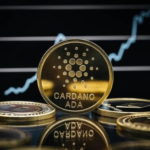