In the wake of the Federal Reserve raising interest rates to historical levels, the dollar has reacted positively, gaining at the expense of other global fiat currencies. Notably, the British pound is among the currencies performing poorly against the dollar.

Despite the dollar’s strong performance, the author of the personal finance book ‘Rich Dad, Poor Dad’ Robert Kiyosaki, believes the U.S. currency’s strength will be short-lived.

In a tweet on October 1, Kiyosaki noted that the dollar will potentially crash early 2023 but suggested that silver might be an alternative asset to cushion against a possible dollar crash.

“Will U.S. dollar follow English Pound Sterling? I believe it will. I believe U.S. dollar will crash by January 2023 after Fed pivots. To profit from crash of U.S. $ I bought many more U.S. silver Buffalo rounds. Silver is a bargain,” said Kiyosaki.

The latest Kiyosaki stand on the dollar comes after he previously warned that the global markets will likely experience a ‘catastrophic crash’, and investors should venture into cryptocurrencies before they usurp the dollar.

At the same time, Kiyosaki had earlier projected an end for the dollar, terming it fake money while advising investors to opt for silver which he suggested might surge to about $500.

In general, other fiat currencies are falling as their respective central banks attempt to keep up with the Fed policies. Notably, there are signs the Fed will continue with the hiking schedule since lowering rates would spell doom for the skyrocketing inflation.

Interestingly, the strong dollar has directly translated to losses in other global fiat currencies, with investors mostly turning to Bitcoin (BTC) as a hedge. In this case, Finbold reported that individuals from the United Kingdom and the European Union are selling both the pound and Euro at record levels to acquire Bitcoin.

The interest is highlighted by a spike in Bitcoin trading volume that has hit a three-month high despite the assets’ price consolidating below $19,000 in a year characterized by significant corrections.

Investors are dumping fiat since they consider Bitcoin a hedge, while others intend to profit from arbitrage. The development highlights Bitcoin’s potential and ability to fulfill the founding principle of acting as a hedge against inflation.

In general, Bitcoin has corrected in line with the stock markets, outweighed by the macroeconomic factors. It is worth noting that despite Bitcoin and the cryptocurrency sector’s correction, Finbold reported on September 26 that digital currencies and the dollar are competing to emerge as the best-performing assets during the second half of 2022. 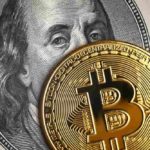