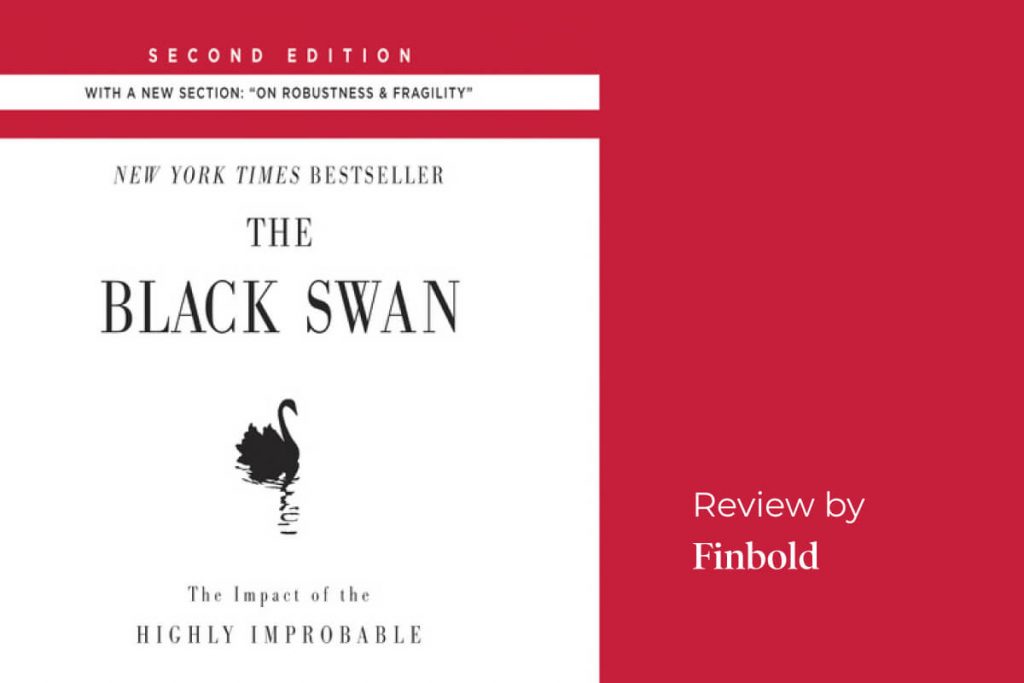 Listen to ‘The Black Swan’ for FREE with Audible Trial HERE.

Nassim Nicholas Taleb’s now popular “The Black Swan: The Impact of the Highly Improbable“ is a book about epistemology, probability, risk, and psychological biases. As such, it’s more of a book on how NOT to invest rather than how to invest.

The term black swan itself has entered the common financial vernacular and is used to describe an outlier event entirely outside of the realm of predictable expectations, which has a disproportionate impact on future developments. Additionally, it is only rationalized as predictable in hindsight after the fact. Or more precisely, for an event to qualify as a black swan it must fulfill the following criteria:

A black swan, in other words, represents unknown unknowns (a grey swan is referred to known unknown). Prof. David Snowden‘s Cynefin framework helps one acquire some orientation in what kind of environment one is operating and how to approach decision-making under different levels of uncertainty.

In our habitual mode of thinking, we tend to accept forward-looking models and repeatable patterns that assume normal bell curve distributions of simple inertia. However, most things in the world tend to be complex and the simplistic sense of linearity of how the world works is what makes us blind to hidden black swans.

Examples of black swan events are the outbreak of World War 1, the invention of the computer, the rise of Google and perhaps the example that best illustrates it, the Thanksgiving turkey which Taleb explains:

Consider a turkey that is fed every day. Every single feeding will firm up the bird’s belief that it is the general rule of life to be fed every day by friendly members of the human race “looking out for its best interests,” as a politician would say. On the afternoon of the Wednesday before Thanksgiving, something unexpected will happen to the turkey. It will incur a revision of belief.

It is worth to mention that Taleb himself has an extensive background as an options trader.

How to Deal With Black Swans

Taleb (not too dissimilar to the above mentioned Cynefin framework) categorizes events in two metaphorical realms to differentiate between domains we can forecast (collectively referred to as Mediocristan) and domains that resist forecasting (called Extremistan). Anything social, including economic life is from Extremistan and the metrics we tend to use are not adapted to it.

What Taleb suggests as an investment strategy is to avoid putting your money in medium-risk investments (because how do you know they’re medium risk anyway?) and instead have most of your eggs (say 85%) in baskets that are extremely safe and secure. This could be the assets like treasury bills for example, because if they fail, your investment portfolio will be the least of your problems anyway. And the rest in things which are extremely speculative (like startups or options) and which expose you to the possibility of hitting positive black swans (rare event representing a large share of the pie).

Taleb’s Black Swan is a follow-up to his “Fooled by Randomness” and is likewise full of delightful anecdotes and useful rule-of-thumb advice (such as, for example, never take advice from anybody wearing a suit and a tie).

It is highly relevant to the dismal science of economics in illustrating how in theory, there’s rarely much of a difference between theory and practice, but in practice, there tends to be a considerable gap between the two.

Taleb himself worked eighteen years as an options trader and has a considerable amount of academic publications besides the Black Swan and the ones that follow (“Anti-fragile: Things That Gain From Disorder”, etc.). Which are more amusing and philosophical in helping one avoid being stupid (our most innate human quality) in figuring out how to turn a lack of knowledge and understanding into action (i.e., how to not be a turkey).

Another takeaway is that probability is not something one can measure the way temperature is measured and you can’t take the lottery winner as an example to follow in ensuring that’ll be a recipe in reproducing his success.

The wise approach is to ensure one’s reasonable exposure to luck (positive black swans) while also being hyper-conservative in ensuring survival.

Get Taleb’s ‘The Black Swan‘ FREE with Audible Trial