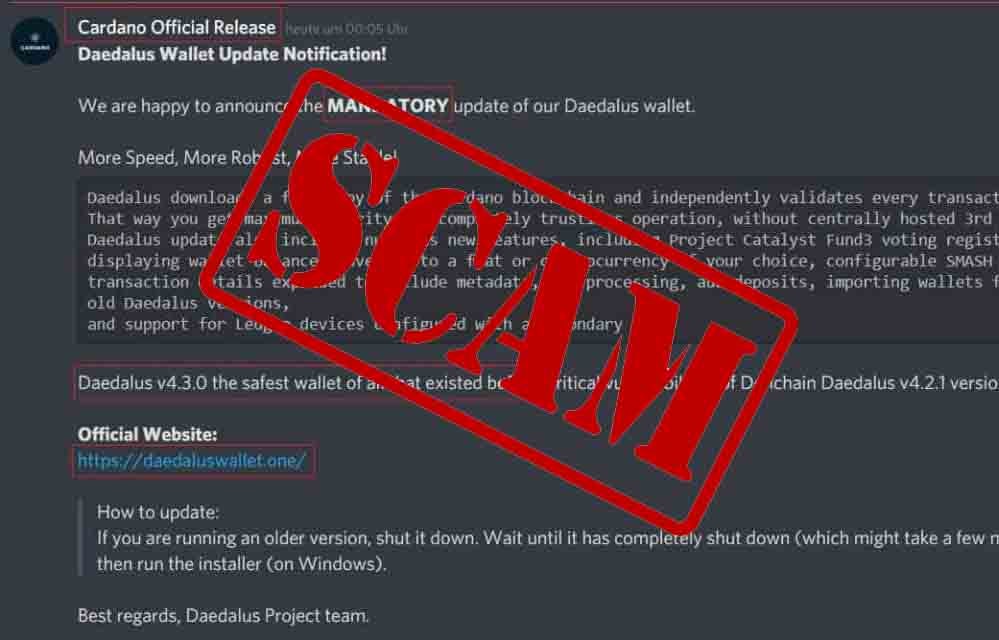 A fake website allegedly belonging to the Daedalus crypto wallet is being marketed on the digital distribution platform Discord with the intention to scam users of their ADA holdings.

The fake website identified by a Reddit user is luring users to perform updates on their Daedalus Wallets. In the Discord post, made under the fake Cardano Official Release account, the promoters note that it is mandatory for users to update their wallets without fail.

The perpetrators are promising users that the new updated wallet comes with a host of features including the ability to convert crypto into fiat, more speed, and stability while terming the wallet as more robust.

Notably, like other cryptocurrency-related products, the Daedalus wallet has previously fallen victim to crypto scams.

“WARNING: We have been alerted to a SCAM site posing as the official Daedalus wallet site. Our domain ends in .io and ://NOT.net! Please ensure you download ONLY from our official site – linked here for your safety and security,” IOHK warned.

The scammers’ target of ADA comes in the wake of the crypto rising to new levels. By press time, ADA was trading at $2, having gained over 45% in the last seven days.

The token has managed to break through key resistance, with assets targeting the $5 price mark. The Cardano network has recently received increased adoption with various use cases alongside continued network updates.

This year, with the growth of cryptocurrencies, wallet scams are on the rise, and fraudsters attempting to leverage the profits in the sector.