The amount of stablecoins held across crypto asset exchanges has hit an all-time high according to analytics providers.

Crypto Quant has reported that the amount of stablecoins, or dollar-pegged digital currencies, now held on exchanges has topped an all-time high of $10 billion.

This could be bullish for Bitcoin and crypto markets in general if they’re seen as being moved and stored in preparation to buy more assets.

During last week’s market correction Ki Young Ju, CEO of Crypto Quant, noted that when Bitcoin is moved to exchanges, it often signals the opposite that investors and crypto traders are preparing to sell.

“In the huge dip, whales deposit BTC to exchanges to make Bitcoins ready to sell immediately, but they eventually don’t sell BTC.”

The major sell-off did not actually occur, and the size of the third Bitcoin correction has only been around 16% from its all-time high of $60,100 to a low of $50,600 on March 25. The previous two corrections in the current bull market were much larger at 31% and 26%.

Over the weekend, Bitcoin prices recovered to $56,400, but things have retreated slightly during the Monday morning Asian trading session. The volatility expected following the major options expiry on Friday failed to materialize.

With more stablecoins than ever before sitting on exchanges, a buying spree could send the asset and markets, in general, another leg higher.

According to its Transparency Report, tether (USDT) is the dominant stablecoin on the market at the moment, with a circulating supply of $40 billion. Since the beginning of 2021, the amount of USDT in circulation has doubled.

Less than a quarter of it is sitting on exchanges, which means much of the rest is being used in decentralized finance protocols, which can earn much better interest rates than any high street bank at the moment.

The second-largest stablecoin is Circle’s USDC which has a supply of $11 billion, while the Binance Dollar is the third largest with $3.5 billion.

Bitcoin prices have retreated by a percentage point over the past 24 hours to trade at $55,375 at the time of writing, according to Coingecko.com.

Ethereum has retreated a similar amount and is currently trading at around $1,700 as the correction failed to accelerate.

One of the day’s top movers is the Theta Network’s THETA token which has pumped over 40% in the past seven days. Litecoin is also having a good start to the week with 5% increase on the day. 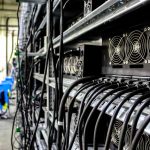