Bitcoin markets could be shaken up today as a record number of derivatives contracts are set to expire.

The last Friday of the month is often a volatile time for bitcoin markets as options contracts expire, but this one could be even more so.

In previous months, the final Friday of the month has been significant for bitcoin prices as there has been a drop in the week leading up to it but gains in the weeks following, according to a report by The Defiant.

Derivatives markets often have often been used to gauge price discovery for spot markets, but in the case of bitcoin, the spot market is much larger.

At the time of writing, bitcoin was trading flat on the day at $52,700 but down 9% since the same time last Friday, according to CoinGecko.

Industry investor and TV presenter Ran Neuner commented on the record options expiring, adding that the $50k support level held and that he expects prices to jump on short selling.

The bullish sentiment was echoed by analytics platform Glassnode co-founders who posted a chart revealing that options traders were buying contracts on the Deribit exchange that are set to expire on April 30 with a strike price of $80,000.

This indicates that many options traders envisage BTC prices climbing next month and have placed bets on that scenario.

However, there have also been several factors, both technical and fundamental, that are leaning towards a bearish outlook for bitcoin.

On-chain metrics suggest that the bull market is entering its latter stages as coin movements are going from long-term larger holders to short-term smaller wallets owned by retail traders according to Glassnode.

The fear, uncertainty, and doubt (FUD) have returned, with billionaire hedge fund manager Ray Dalio predicting that the U.S. government may ban bitcoin as it did with gold in the 1930s.

Additionally, Chinese mining boss, Jiang Zhuoer, stated that economic recovery as Covid vaccines are rolled out may reduce the incentive to load up on store of value assets.

Either way, strap in for a volatile Friday and a wild weekend on bitcoin and crypto markets. 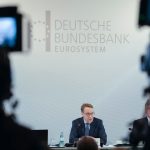