Most discussions about cryptocurrency investments center on Bitcoin (BTC), Ethereum (ETH), and the other top 10 assets for newcomers to the space. While these coins are well-known in the cryptocurrency market, there are other cryptocurrencies with just as much potential as investment possibilities and as blockchain projects in general that can be purchased for $1 or less.

As each project has its own qualities and potential for success, we will explore the five of the best cryptocurrencies you can purchase for under a dollar in no particular order.

Founded by Ethereum co-founder Charles Hoskinson, Cardano (ADA) is one of the most interesting blockchain projects in development. The digital asset entered 2023 with positive momentum bringing with it the success of the top cryptocurrency protocol by development activity in 2022.

Cardano has one of the top scores for developer engagement among all cryptocurrencies. It was developed with a scientific mindset and research-driven methodology. Last year, the project’s Alonzo upgrade brought smart contract capabilities to the network. Non-fungible tokens (NFTs). are also functional in the ecosystem, and Cardano is a feasible network for them because of its cheap transaction fees.

Cardano has devoted a substantial amount of effort to acquiring market share in Africa and has agreements with several governments and organizations on the continent.

Currently priced at under $0.31 a piece and ranked 9th by market cap. Trading volume hit in January hit a 2-month high, as large whale transactions surged on the network after a 30% price rise over ten days from December 30.

Formerly known as Matic Network, Polygon (MATIC) is an ERC-20 token that operates on a layer 2 blockchain network.

Polygon’s transactions occur on subsidiary chains, diverting traffic from the Ethereum parent chain and allowing for quicker, cheaper transactions. Since its mainnet debut in early 2021, Polygon has had meteoric growth, with projects like AAVE and 1Inch launching on the network to take advantage of its reduced fees compared to Ethereum.

Based on its current market capitalization, Polygon is the tenth-largest cryptocurrency in the world, with a $7.5 billion market worth. By the end of 2021, it had risen to more than $2.50, its all-time high but is now trading at $0.8641.

VeChain (VET) was created to aid in the monitoring of material goods all the way through the supply chain. The blockchain aims to raise the amount of transparency supplied on the origins of things and their itineraries to their ultimate destinations by combining blockchain technology with actual hardware that is attached to commodities.

Former Louis Vuitton China CIO Sunny Lu created VeChain in 2015 as a subsidiary of Bitse, a blockchain technology firm. The VET coin was formerly known as VEN until its ticker name was changed to VET when it was first released as an ERC-20 token on Ethereum. In 2018, VeChain underwent a rebranding process that included the introduction of its own native blockchain and the transition to the VET token.

By staking their VET, holders may earn rewards in the form of VeThor Tokens (VTHO) through the VeChain network, which employs a proof-of-authority consensus process. The blockchain’s calculations and operations are powered by VTHO. Regarding total market value, VET is now at the 34th spot.

The dog meme token Shiba Inu (SHIB) has been ranked as one of the most interesting cryptocurrencies in 2022. Indeed, per data acquired by the world’s largest crypto exchange Binance, Shiba Inu is among the top three most-watched cryptos in 2022.

Users that own SHIB may stake it for a return, act as a liquidity provider, and have a say in the management of the Shiba Inu community; nonetheless, SHIB is mainly a speculative token.

Although SHIB is moving away from the platform, it has a presence in the gaming business thanks to its use of non-fungible tokens. Therefore, the SHIBOSHIS project aims to provide its holders access to VR gaming, token trading, and digital land acquisition.

The principal use of XRP is as a blockchain for faster and cheaper international payments. Neither Proof-of-Work nor Proof-of-Stake is used in the XRP consensus process. Instead, the requested updates to the previous ledger are verified by validating servers. In XRP’s blockchain, no governing body decides who may create nodes or validate transactions. That allows for quick processing of transactions in many currencies, which in turn attracts more investors who are abandoning the antiquated and sometimes slow SWIFT network.

With new ledgers being generated every three to five seconds, XRP’s blockchain facilitates instantaneous settlement of transactions. According to Ripple’s calculations, the XRP ledger can process 1,500 transactions per second (TPS) on average and 65,000 TPS at total capacity. In comparison, Bitcoin and Ethereum have settlement speeds of 5 TPS and 15 TPS, respectively.

Even though Ripple has been fighting the SEC in court for three years now, the company is optimistic that it will ultimately prevail. With that, many in the crypto community anticipate the price of XRP to rise. At the time of publication, XRP was trading at $0.36, the sixth largest crypto asset by market worth.

Naturally, the crypto space is a quickly developing industry, so you may not want to restrict yourself to cryptocurrencies that cost less than $1 per unit. Remember that cryptocurrencies are divisible and that purchasing some portion of Bitcoin is feasible for $1. 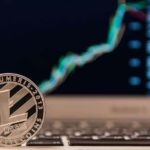