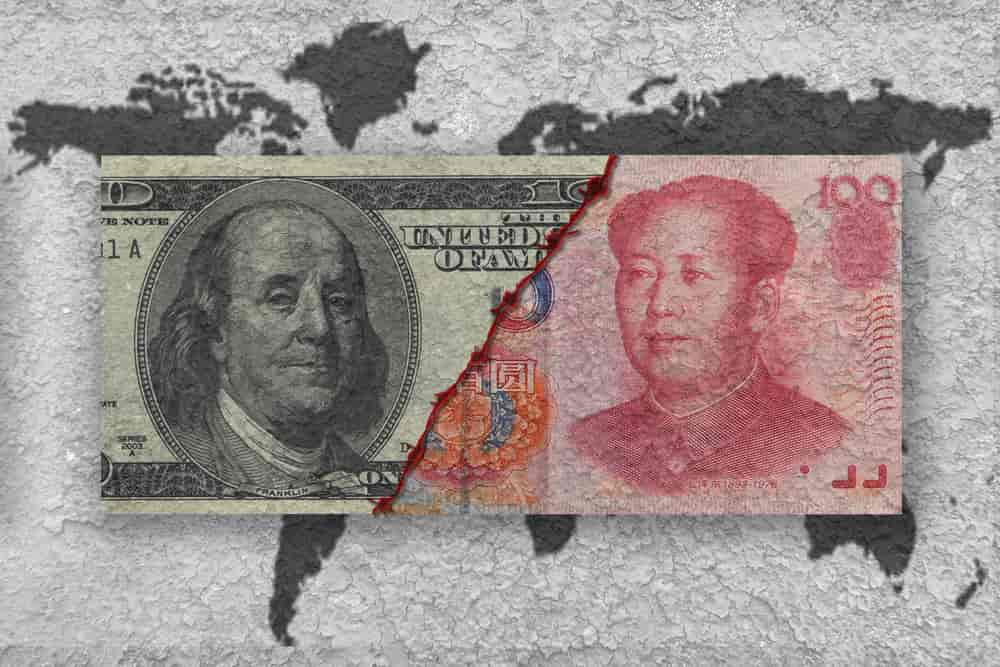 Both the United States and China are considering economic superpowers, a factor that has placed companies from both countries on a worldwide scale. However, U.S. publicly traded firms are emerging top registering significant market valuations.

According to data compiled by Finbold, the top ten publicly traded U.S. companies have a cumulative market capitalization of $12.82 trillion as of December 21, 2021. The significance of the market cap stands out when compared to Chinese top ten counterparts, which account for a total valuation of $2.54 trillion, at least five times less than U.S. companies.

Elsewhere, Apple ranks the highest with a market cap of $2.7 trillion, followed by Microsoft at $2.4 trillion, while Alphabet is third at $1.8 trillion. In China, Tencent ranks as the largest firm with a valuation of $529.2 billion, followed by Kweichow Moutai at $401.2 billion, with eCommerce giant Alibaba ranking third at $311.7 billion. Data on the market cap is provided by the CompaniesMarketCap tracker.

Why U.S. companies have a higher market cap

Although the companies from both countries offer diverse products, U.S. firms are dominated by technology entities that enjoy a global reach.

The valuation comes after the technology sector experienced unprecedented growth inspired by the pandemic. The industry’s stocks gained prominence as their products offered consumers the means to navigate the lockdowns initiated to control the health crisis.

In general, U.S. companies appear to have the edge over their Chinese counterparts despite the two countries ranking as leading economic powerhouses. Over the years, both countries have competed in various aspects like technology, but the U.S. is significantly ahead.

The high valuation by U.S. companies can be attributed to factors like a large addressable domestic market, a large GDP, and a homogenous language. This ability has enabled the companies to get their foothold at home while expanding globally. However, despite China having a significantly higher population, the market seems to have minimal influence on the companies’ valuation.

Additionally, the ease of doing business in both countries has partly contributed to American companies dwarfing their Chinese counterparts. The U.S. is considered to have an open and transparent regulatory structure that helps companies adopt a risk culture. Therefore, companies can make difficult decisions in such an environment and handle the consequences, with failure viewed as a stepping stone on the road to success. The ability to take positive risks and bounce back from setbacks has influenced the companies global expansion.

Furthermore, the market capitalisation by U.S. firms also shows that investors prefer the region’s stocks. In general, the U.S. stock market hosts fertile ground for some of the leading corporations in the world. The companies are considered to be ahead in technological advancements and constantly innovating.

Elsewhere, the Chinese market is characterized by uncertainty stemming from regulatory interference. For instance, Alibaba’s stock has significantly dropped in 2021 as authorities escalate a crackdown on domestic companies, an aspect that has stalled growth.

Worth noting is the economic impact of the pandemic has also impacted the companies with valuation highlighting how U.S. firms benefitted from liquidity following the massive stimulus injection by the government.

However, as part of cutting the dominance of United States companies, Chinese authorities launched a crackdown on domestic entities that list on U.S. exchanges. Consequently, to avoid running into trouble with authorities, the companies opt to list in China at the expense of the lucrative U.S. market.

The crackdown is part of the ongoing tensions between the two countries with market experts suggesting the future is bleak for the Chinese companies intending to list in the U.S.

According to Finbold’s previous report, TCW Group’s David Loevinger stated that by 2024, no Chinese firm might exist on the U.S. stock exchange.

In the U.S., there is also heightened scrutiny from regulators and U.S. legislators calling for the splitting of top companies to promote competition. If such a move is attained, there is a likelihood the companies might get close to a level playing field with their Chinese counterparts.