Japanese capital Tokyo is on the verge of going into lockdown in a bid to combat the spread of the novel Coronavirus.

On Wednesday, Governor Yuriko Koike called on residents to cooperate by staying at home as much as possible while minimizing nonessential gatherings.

According to the governor, it was time the city took drastic action to contain the crisis.

“Tokyo has never experienced a situation like this. Cities in other countries are halting transit and prohibiting residents from going outside in a bid to avoid a collapse of their health care system. We need to act now to avoid that situation,” said Koike.

By press time, Japan had over 2,000 cases of the novel coronavirus and 50 deaths, including those from the Diamond Princess cruise ship.

Amid the lockdown speculations in Tokyo, there has been a drastic spike in the number of registrations of retail Bitcoin investors.

For example, by the second week of March, the Japanese crypto platform BitBank witnessed a rise of new registrations on the platform by 40%.

For years, Bitcoin has been considered a safe haven for investors in case the traditional financial markets collapse during crises like the current Covid-19.

Currently, most stocks in the traditional financial sector have significantly plunged and crypto enthusiasts view Bitcoin as a cushion for such circumstances.

Furthermore, with the upcoming Bitcoin halving, the asset is expected to increase in price while at the same time increasing the chances of attaining mainstream adoption. Many investors would like to capitalize on this event. 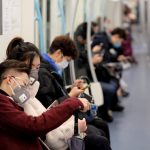