Amid uncertainty that has engulfed the cryptocurrency market after an extended period of bearishness, during which its flagship asset, Bitcoin (BTC), briefly slumped below $19,000, before returning above the $20,000 mark, pessimistic warnings about its future are coming from China.

Specifically, the media outlet Economic Daily, run by the Central Committee of the ruling Chinese Communist Party, published an article on June 22, warning investors about the risk of Bitcoin prices “heading to zero,” after the carnage of the crypto market, South China Morning Post reported.

According to the article:

“Bitcoin is nothing more than a string of digital codes, and its returns mainly come from buying low and selling high. (…) In the future, once investors’ confidence collapses or when sovereign countries declare bitcoin illegal, it will return to its original value, which is utterly worthless.”

At press time, Bitcoin was trading back above the $20,000 mark, at $20,566, which is a 4.47% drop on the day and a 3.58% loss across the previous seven days, according to the data retrieved from CoinMarketCap, with some analysts opining that Bitcoin correction towards $10,000 was still on the table.

It is worth noting that the warning from state-operated media reflects the Chinese government’s harsh stance toward crypto, which culminated in an effective crypto ban that was carried out in stages, starting with May 2021.

In June 2021, the government banned all domestic crypto mining, while it altogether outlawed digital currencies in September, citing concerns over their effect on the environment, as well as people using them for money laundering.

Despite the widely publicized crackdown, relevant data has shown that dozens of reachable nodes securing the Bitcoin network are still running on the territory of China, as Finbold reported in early June.

In mid-May, Finbold reported on the traffic from China accounting for about 20% of Bitcoin’s total hash rate from September 2021 to January 2022, after it previously dropped to zero in July, in response to the ban. 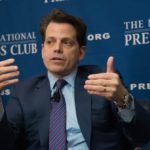 Scaramucci’s SkyBridge to take another shot at spot Bitcoin ETF