The cryptocurrency market has reacted negatively to the latest inflation data, with Bitcoin (BTC) emerging among the main casualties. Notably, the skyrocketing inflation might compel the Federal Reserve to hike interest rates, with the market observing how Bitcoin and Ethereum (ETH) will react.

In this line, Bloomberg Intelligence senior commodity strategist Mike McGlone has suggested that Bitcoin and Ethereum will be the potential winners from any interest rate hikes citing ongoing activities around the two assets, he said during an interview with The Wolf of All Streets on September 13.

McGlone, who previously predicted Bitcoin would trade at $100,000, also cited the potential bullish impact of the Ethereum Merge upgrade on the general crypto market.

“There’s things like Ethereum, which we know okay the Merge is coming up, it’s going to be a little dicey with the technology, but it’s revolutionizing this financial world,” he added.

According to McGlone, the ongoing market conditions are critical indicators for the rise in Bitcoin and Ethereum prices, noting that the current lows are establishing a foundation for a possible rally.

“I fully expect Bitcoin and Ethereum and the overall market depending on how you measure it. I look like an index of like the top ten will come out ahead but let’s remember this was one of the most historic best, hottest leading indicators ever on the way up. Now it’s just inverting lower, but what are we doing in this case? We’re really building that foundation,” McGlone said.

The strategist believes that Bitcoin will likely continue attracting more institutions despite the bear market. He cited instances where investment giant Fidelity partnered with other financial institutions to launch a crypto trading exchange.

With Bitcoin struggling to sustain its value above the $20,000 level, McGlone noted that the price is good support. He stated that previous lows saw Bitcoin trade at around $3,000, but the current bear market has progressed.

With the cryptocurrency and stock market experiencing significant losses in the first half of 2022, McGlone previously noted that risk assets like Bitcoin would stand out in the second half of 2022. Regarding Ethereum, and the demand for the DeFi asset rising, while the supply is decreasing, McGlone had stated earlier this year that the price of ETH will continue to go up as it is “becoming the internet’s collateral.” 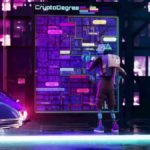