As the cryptocurrency sector continues struggling to regain its strength, one analyst anticipates an exceptionally bullish future for its second-largest asset by market capitalization – Ethereum (ETH).

Specifically, if historical patterns from 2016-2017 are any indicator, Ethereum could be in for one of the largest bull markets in the history of the crypto industry, according to a tweet published by the pseudonymous crypto analyst Moustache on October 11.

Comparing the ETH price action from that period to the period between 2021 and 2022, the analyst noted in his technical analysis that the “pattern from ‘16-’17 repeats almost identically,” which, according to him, means that:

“Ethereum will soon start one of the biggest bull markets in the history of cryptocurrencies.”

Another indicator of a potential future price hike for Ethereum is its dwindling supply in circulation, which dropped by nearly 4,000 ETH in only two days. Usually, fewer tokens in the circulating supply increase its value to the general public.

On top of that, the number of new Ethereum addresses by the seven-day moving average (MA) has just reached a 10-month high of 5,044.161. What’s more, Ethereum’s open interest on the largest crypto exchange Binance has risen by 10% to its all-time high of 1.3 million ETH as fresh capital started entering the market.

At the same time, Ethereum added 135,780 new ETH addresses to its network on October 8, which is the highest number recorded since December 7, 2021, despite its social activity dwindling post-Merge, as Finbold reported.

As things stand, Ethereum is currently trading at $1,300, which represents an increase of 1.32% on the day, but is still a decline of 3.42% across the previous seven days.

Meanwhile, its market cap at press time stood at $159,87 billion, according to CoinMarketCap data retrieved on October 12. 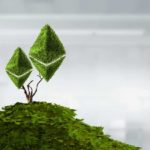 Top 3 green cryptocurrency projects to keep an eye on