Over the past week, the entire cryptocurrency market was caught in a bearish trend, during which its flagship asset had dropped under the $20,000 mark – the lowest since December 2020.

However, this week the market seems to be recovering, with specifically around $67 billion flowing into the crypto market capitalization in only 24 hours, bringing the total market cap back to $911 billion – up from its lowest point at $844 billion, according to the CoinMarketCap data acquired on June 20.

Meanwhile, most of the crypto assets are recovering as well, with Bitcoin (BTC) coming back above the $20,000 mark and pushing toward $21,000. By comparison, Bitcoin had crashed below $19,000 on June 18 before rebounding marginally above, as Finbold reported.

At the same time, Ethereum (ETH) is climbing as well, gaining 9% on the day, although it’s still down 6.62% from seven days ago. It is currently trading at $1,147 – holding on in the green despite the top 100 crypto funds cutting their ETH holdings by 85% on-chain in three months.

Interestingly, Terra Classic (LUNC) is the most trending coin after beginning on a rock path three weeks before, when LUNA 2.0, the platform’s original chain, suffered a significant price correction hours after its launch.

Rebranded as Terra Classic, LUNC has attracted tremendous interest among crypto traders. It is currently trading at $0.00005955, gaining 6.72% on the day, albeit still 0.81% lower than seven days before, as per CoinMarketCap information. 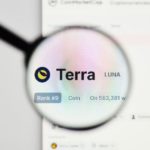