Following another revisit of $40,000, Bitcoin prices have slid back again over the weekend as buying pressure for the king of crypto starts to wane.

Bitcoin was trading at around $35,100 at the time of writing. Since hitting $40k again on January 14, the asset has been down-trending, and it has lost around $5k over the past couple of days.

Saturday saw prices climb as high as $38k, but resistance there proved to be too strong, and the selling resumed, dropping prices to an intraday low of $34k on Sunday, January 17. The chart has shown a lower high, meaning that a larger correction could still be on the cards.

Analyst ‘CryptoHamster’ has been looking at the chart patterns, adding:

“There is a descending wedge formed within a triangle. Price already broke it to the upside and have re-tested the support. If it holds, we could expect the continuation of the growth to the upper border of the consolidation triangle.”

Bitcoin Price Could Continue Down

According to Bloomberg, JP Morgan strategists said that Bitcoin was in a similar position in late November, except with $20,000 as the test. They added that trend-following traders could propagate the past week’s correction and;

“Momentum signals will naturally decay from here up till the end of March if Bitcoin’s price fails to break above $40,000,”

Taking a more bullish approach was Pantera Capital CEO Dan Morehead, who said that Bitcoin will rise more than 200% in the next eight months to reach $115,000 by August 2021. In a conference call last week, the investor stated;

“Six or so months ago, Bitcoin’s market cap was the same as L’Oreal Cosmetics, it’s now past Facebook, and that is just a huge difference in how the market perceives Bitcoin.”

The total market capitalization for all digital assets remains above a trillion dollars, but only just. Since late last week, around $60 billion has exited the market, according to Coingecko, most of it being Bitcoin-related trades.

Most cryptocurrencies were trading relatively flat on the day during Monday morning’s Asian session. A few were still making minor gains, though, and these include last week’s rocket ship Polkadot which is up 2% on the day to top $17 after reaching an all-time high of $18.25 on Sunday.

Chainlink (LINK) and Binance Coin (BNB) are doing well today, both making 9% to reach $22.30 and $45.84, respectively. Cosmos and Cardano are also gaining as altcoins enjoy the momentum at the start of the week. 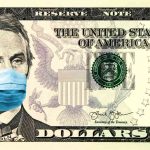