Speaking during an interview with Kitco News on July 23, Grummes suggested that the next rally will likely occur within six to 12 months ahead of the Bitcoin halving event slated for May 2024.

According to the professional investor, the current market sentiment, however, indicate that Bitcoin might be up for a ‘relief rally’ in the summer, likely to hit $35,000 while stressing that the crypto winter is far from over.

“However, in the larger context, I think we are in the crypto winter when it comes to Bitcoin and usually those cryptos take some time. We probably will have to wait until the next Bitcoin halving, which is supposed to be happening in May, 2024. So that will be nearly two years from now. I think realistically it will take at least another six to 12 months before this market is really ready for a big new bull market<…>It could easily rally to $25,000 maybe even $35,000 ,” he said.

He also suggested that based on the current Bitcoin price movement, the crypto is in a recovery mode in correlation with the stock market while cautioning that investors should expect surprises on the upside and downside.

In the long term, Grummes expressed bullishness for Bitcoin, stating that increased adoption and entry of institutions will propel the next bull run, but it all depends on the Federal Reserve’s handling of inflation. Previously, the investor had cited the $100,000 mark as Bitcoin’s ideal next record high by 2022 Q1.

However, Bitcoin and the general crypto market have traded in the red zone in the first half of 2022. Notably, the flagship crypto recorded its worst returns in a quarter during Q2 2022, losing its value by 56%. By press time, the asset was trading at $22,700 after losing its value by over 3% in the last 24 hours.

As reported by Finbold, crypto trading expert Michaël van de Poppe suggested that for the asset to rally towards $28,000, it had to break key resistance at $23,800. 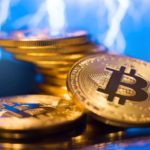