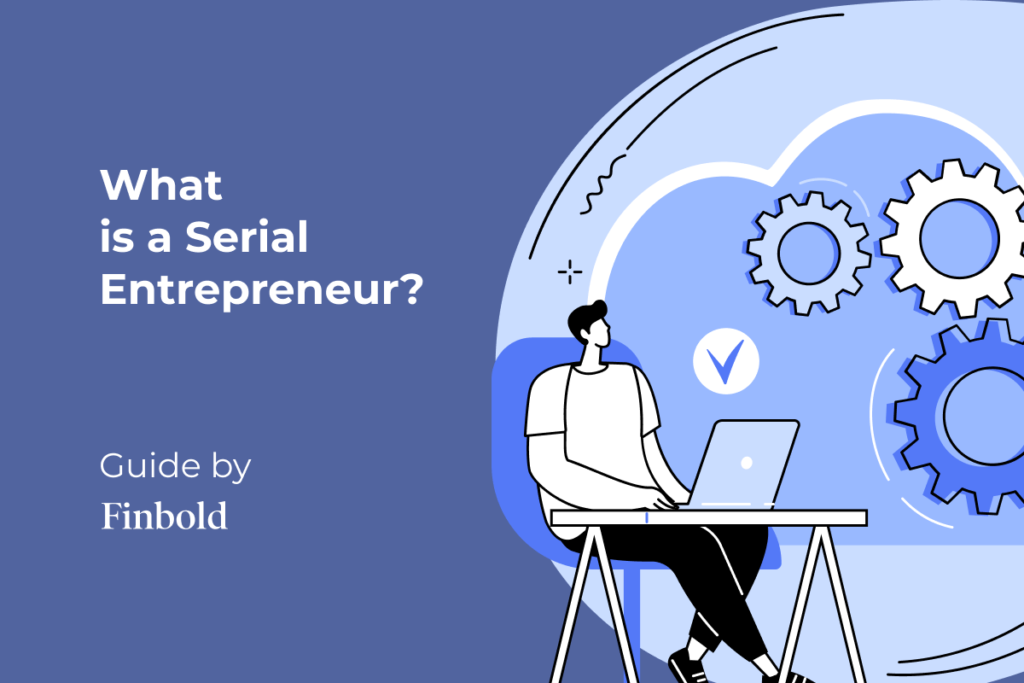 Ever wondered what it takes to launch multiple successful businesses? This guide will take you through all the steps to understand what a serial entrepreneur is, how they manage their businesses, their character traits, and the pros and cons of serial entrepreneurship.

Most people have great business ideas, but few ever muster the courage to follow through and try to actualize them into successful business ventures. These individuals are referred to as wantrepreneurs.

There’s a small percentage of individuals that will go ahead to assemble the resources necessary to start their businesses. These people are entrepreneurs, and they have distinct characteristics that distinguish them from wantrepreneurs. The most significant difference being their resolve and passion for wanting to see their ideas come to fruition.

It is an arduous journey, from the conception of an idea to the establishment of a thriving business. Some of the handful that tries it end up wiped out emotionally, physically, and financially due to their efforts. Ultimately, it is part of the risk involved in pursuing a dream.

Despite this highly likely undesirable outcome, the rewards from making it as an entrepreneur are almost always worth the effort. Business owners often have to slave away for several years with the hope of coming out at the top, but very few do.

In the next section, we’ll go through the characteristics that these types of entrepreneurs possess that enable them to establish many profitable businesses. Including how they manage to run several organizations – sometimes concurrently – and, most importantly, how you may develop these traits to launch those business ideas you’ve been sitting on for so long.

What is a Serial Entrepreneur?

As defined by the Oxford Dictionary, an entrepreneur is someone who “makes money by starting and running a business,” while the meaning of the word “serial” is “doing the same thing, in the same way, several times.”

In combination, these words mean someone who makes money by establishing and operating many successful businesses. The term ‘successful’ is important in this definition since establishing many businesses that fail does not constitute someone a serial entrepreneur.

The businesses don’t need to be started and run concurrently. Sometimes, the business owner might come up with a money-making idea, launch the business, scale it, and exit before moving on to the next venture. Either way, as long as someone has more than a couple of successful ventures to their name, they qualify to be referred to as serial entrepreneurs.

In addition, serial entrepreneurs are highly innovative people with special skills crucial to assembling all the ingredients necessary to start a business, implementing them, and scaling the venture to profitability. It may seem like a simple task to outsiders, but the mere fact that only a handful of these multiple-business founders are successful suggests that it may not be as easy as it looks.

Two ways in which anyone can launch multiple businesses are individually or through a strategic partnership. For a serial entrepreneur, the latter often makes more sense since it’s improbable that one person can be well versed enough in multiple fields to identify opportunities.

Partners bring the necessary intimate knowledge and skills to thrive in a new field while also acting as co-managers for the enterprise, an arrangement that is advantageous to both parties. The serial entrepreneur would leverage the venture partners’ knowledge and experience in the new industry while they (partners) leverage the founder’s experience in launching businesses. Together, they can also manage the business and, optionally, serve the company as employees.

For the partners, combining efforts with the entrepreneur gives them access, not just to vast business connections and financial resources, they also get to tap into the entrepreneur’s skills of turning ideas into successful ventures. It is a symbiotic relationship.

For a small enterprise, a few partners may be enough to supply the required manpower to run the business. However, for medium to large companies, serial entrepreneurs have to employ people to which they will delegate their responsibilities. This way, they can get as much work done across their multiple businesses without sacrificing their efficiency.

Sometimes, business owners take a complete back seat to managing their ventures and delegating the daily management duties to the executive team members. A serial entrepreneur could retreat and take up only the role of a director, which is a less active role compared with managing the business, which frees up more of their time to dedicate to other ventures.

Entrepreneurs can be described using a particular set of qualities to which their success can be attributed. It takes a special kind of person to become a serial entrepreneur, and some of their characteristics are shared with single-business founders. These qualities include the following:

These characteristics of a serial entrepreneur are not conclusive. As we mentioned before, they also share a lot of qualities with single-business entrepreneurs, including risk-taking, persistence, and being visionaries.

Now that we have highlighted some distinctive characteristics of multiple business founders, let’s look at a few examples of notable individuals who have successfully launched numerous businesses.

British entrepreneur Sir Richard Branson is perhaps the quintessential poster child for serial entrepreneurs all over the world. His Virgin brand has been slapped on at least 200 companies ranging from record studios, rail and air travel, broadcasting, telecommunications to print and clothing. He launched his first business, a student magazine company, back in the 1970s in his early 20s.

It’s worth noting that even with a recognizable household brand such as Virgin, Branson still manages to launch unsuccessful businesses. It is the price of entrepreneurship. Several duds have come out of the Virgin brand, most of which have been folded, while a few others have been sold off.

As of September 2021, Forbes reports Musk’s net worth to be more than $200 billion, making him the wealthiest person in the world. A large portion of his wealth comes from his Tesla shares and the rest from his stake in the space exploration company SpaceX, which he also co-founded.

Musk first started his entrepreneurial pursuits through the software development company Zip2, which he co-founded with his brother Kimbal and Greg Kouri in 1995. He then co-founded an online financial services company called X.com which later merged with PayPal and saw Musk take up the role of CEO. After selling PayPal to eBay at the turn of the century, Musk moved on to electric car company Tesla, co-founded in July 2003 by Martin Eberhard and Marc Tarpenning. Musk joined the company in 2004, initially as an investor, but soon took up an active role in its management as the CEO in 2008.

Other ventures that have been associated with Musk include SolarCity/Tesla Energy, Neuralink, The Boring Company, and OpenAI, a not-for-profit artificial intelligence (AI) research company.

Andy Bechtolsheim is a German national who co-founded the American technology company Sun Microsystems in 1982. He took up the role of the chief hardware designer and became the company’s first employee.

In 1995, Bechtolsheim left Sun Microsystems to create Granite Systems, a high-speed network switches manufacturer. He sold the company a year later to Cisco Systems for $220 million and joined Cisco as the vice president and general manager of the Gigabit Systems Business Unit.

Bechtolsheim stayed with Cisco through 2003 when he left to lead Kealia, Inc., co-founded in 2001 with Stanford Professor David Cheriton. Sun Microsystems later acquired Kealia in 2004 in a deal that saw Andy return to his first brainchild to serve as senior vice president and chief architect.

In 2008, Bechtolsheim again left Sun Microsystems for Arista Networks, where he took up the roles of Chairman and Chief Development Officer. Arista is a high-speed networking company he co-founded in 2005 for the second time with Cheriton.

Last but not least in our shortlist of notable serial entrepreneurs is the late American business tycoon Wayne Huizenga. Mr. Wayne had three multi-billion dollar companies to his name and several others with considerable market share.

The first of his companies was Waste Management, Inc., a Fortune 500 garbage collection company he created in 1968. It’s worth noting that Wayne hailed from a family of garbage collectors who made this business a natural introduction to the world of entrepreneurship for him.

Wayne then followed the Blockbuster Video success with the launch of AutoNation in 1996. AutoNation is an automotive dealer that also grew to become a Fortune 500 company and one of the largest dealers in the country.

Pros and Cons of Serial Entrepreneurship

It is true that there are many benefits to starting on the serial entrepreneurial route, but there are also certain drawbacks that should be taken into consideration. We’ll start with the positives, which include all of the good outcomes that have resulted from the pursuit of numerous successful business ventures.

Launching a business is challenging. Most people dream of doing it but never get around to actualizing those dreams. Starting multiple ventures could potentially lead to higher financial returns. There are drawbacks to serial entrepreneurship as well including huge financial risks, time, stress, etc., but generally, the rewards far outweigh the negatives.

Is serial entrepreneurship for you? Well, that depends on your goals and your character. If you find that you lack some or all the character traits we identified above that most serial entrepreneurs tend to possess, you can start cultivating them. A character can be built just like you can build a skill.

Start practicing and visualizing your ideas and how to make them happen, then get to work. You do not need to know everything right out of the gate. No single venture can be built exactly like the next, and this means that most of the things you need will become apparent as you work on your business.

What is a serial entrepreneur?

A serial entrepreneur is someone who makes money by launching multiple businesses. They could run these businesses simultaneously, delegate the management duties or simply build it, scale it, and sell it before moving on to the next venture.

What are the characteristics of a serial entrepreneur?

Most of the characteristics attributed to an entrepreneur can be used to describe a serial entrepreneur, but the latter has extra qualities that differentiate them. They include an extreme passion for what they do, heightened curiosity, great at networking, higher levels of intelligence, emotional agility, and efficient time management skills.

Serial entrepreneurs are able to effectively manage several companies by leveraging the help of fellow partners and employees to oversee the daily activities while they focus on duties and responsibilities they are more comfortable handling. Those that are unable to juggle several businesses can instead opt to run one venture at a time whereby they launch it, scale it to profitability, sell it then move on to the next best thing.