Stone Ridge Asset Management CEO Ross Stevens has hit out at the financial establishment for underestimating Bitcoin. Stevens singles out Bitcoin critics like Berkshire Hathaway CEO Warren Buffett, who likened the asset to ‘rat poison’ back in 2018.

“Warren Buffett calls Bitcoin rat poison, that one shameful, that one is shameful. Because Bitcoin is giving life not taking it. It’s giving life right now to 10s of 1000s in El Salvador and Pakistan, then as well as giving life it’s not taking it and soon to be millions and with strike and NYDIG and lightning soon to be soon to be billion. So fraud, money laundering, rat poison Bitcoin. It’s just intellectual laziness,” Stevens said.

The sentiment by Buffett adds to his perennial dismissal of Bitcoin. The businessman has questioned Bitcoin’s value due to its fixed supply. He maintains that all cryptocurrencies, in general, will not last.

Stevens adds that Bitcoin in the current state is unstoppable, citing early regulatory hurdles that saw some countries outlaw the digital asset. He notes that even if Bitcoin gets banned, it will still power transactions.

He further rules out the possibility of the United States banning Bitcoin. Stevens asserts that:

“And I think about our own country, I really don’t think a ban is in store because I don’t think it’s possible, but we can just we can just go there for a second. Let’s just say the US banned Bitcoin. It wouldn’t stop it would accelerate it.”

The Chief Executive acknowledges that Bitcoin’s capabilities over fiat lead to a surge in the asset’s adoption by institutions. This comes when several institutions like MicroStrategy have converted a significant amount of their cash reserves into Bitcoin.

The entry of institutions into the Bitcoin space contributed immensely to the current rally, with an all-time high in February. By press time, the asset trading at $46,992 based on Finviz.com data.

Stone Ridge is among institutions investing heavily in Bitcoin. As of October last year, the firm had $150 million in Bitcoin investments. However, the Stone Ridge has not revealed the total value of its Bitcoin reserves.

Furthermore, during the conference, Stevens confirmed that Stone Ridge Asset Management liquid reserves are all Bitcoin.  He maintains that they highly believe that the dollar will depreciate against bitcoin in the long term giving rise to Bitcoin. 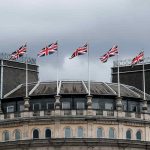