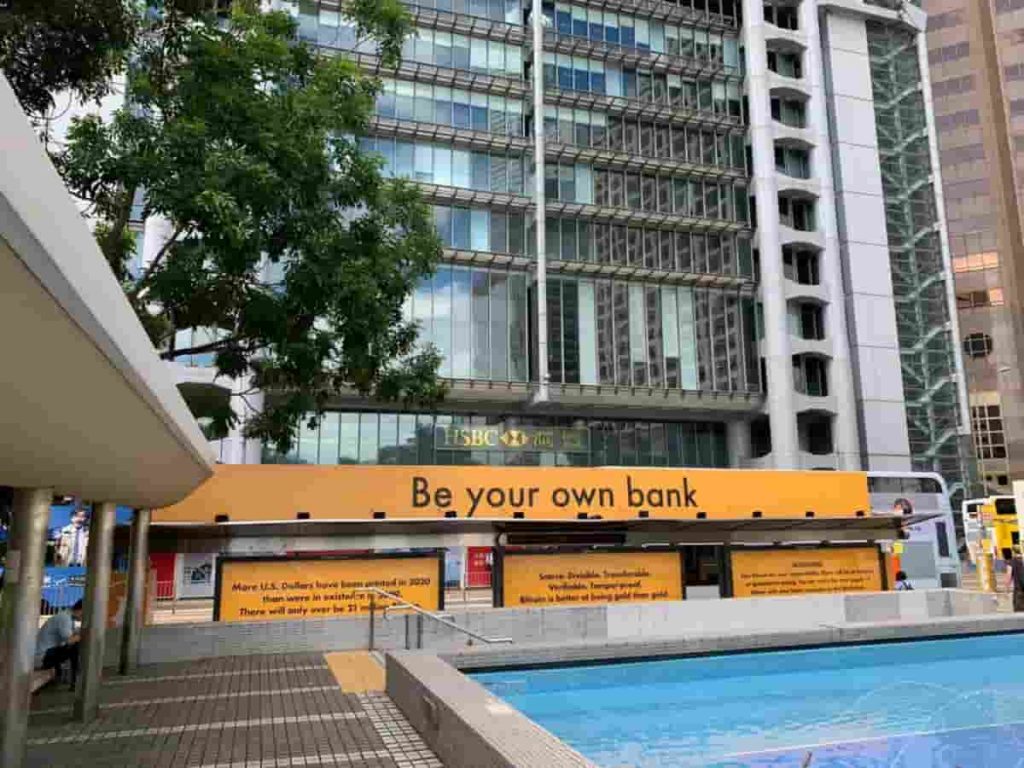 Massive advertising posters supporting Bitcoin have been plastered on a tram station located right in front of HSBC Hong Kong headquarters. The ads are part of a campaign by The Bitcoin Association of Hong Kong (BAHK).

The non-profit association seeks to promote the use of Bitcoin in the city with funding coming from community donations. The current ads are part of a campaign that will run until October 8th.

Titled ‘Be your own bank’ the ads encourage people to ditch the traditional banking system and instead opt for Bitcoin. The message highlights some of the benefits of digital assets like tamper-proof and giving users full control of their money.

A Reddit user identified as Onyb shared the ads photos with some bearing quotes such as:

“More US Dollars have been printed in 2020 than they were in existence in 2009. There will only ever be 21 million Bitcoin”.

Do Kwon responds to ‘falsehood’ reports of South Korea freezing his $40 million in crypto Bitcoin whales show ‘rare’ signs of sustained accumulation – what it indicates? Bitcoin nearing a year-long downtrend on the weekly timeframe – what it means for BTC

The advertisers also issued a disclaimer stating that everyone should be responsible for their Bitcoin. The warning highlights the importance of enhancing security for one’s Bitcoins.

It is not year clear why HSBC headquarters was perfect for the ads. However, during the pro-democracy protest in Hong Kong, the banking facility was among institutions that closed down accounts belonging to protesters.

In general, Bitcoin supporters have accused authorities of using the banking system as a tool to control people, especially where unrest has erupted. Some protesters have been denied access to banking services while at the same time printing of more money brings peoples savings value to zero.

The development comes at a point when Bitcoin’s price has been ranging between $9,800 and $10,500 for nearly a week after a shortfall from almost $12,100 on Sept. 1. By press time, the asset was trading at $10,265. Traders expect Bitcoin to recover and the ongoing consolidation phase poses as a healthy pullback.