Since the start of the year, the cryptocurrency market has lost almost $1 trillion in market cap due to the downward pressure imposed on it, culminating in a run of bankruptcies involving crypto hedge funds and lenders, including Celsius Network, Voyager Digital, and Three Arrows Capital, and the scaling back of operations at firms like Blockchain.com and Coinbase.

Based on the statistics provided by BitInfoCharts.com, 25,395 different addresses had a Bitcoin balance of more than $1 million, and an additional 4,102 of the addresses had a combined balance of approximately $10 million or more at the end of Q3.

Employing the web archive tool Wayback Machine, figures showed that on January 5, 2022, 99,092 Bitcoin (BTC) addresses held $1 million or more of the digital asset at the start of Q1.

Since January, the number of Bitcoin Millionaires has decreased significantly. The loss is more dramatic if we take the period further back to October 2021, when BTC was trading near its all-time high. 116,139 Bitcoin addresses were confirmed to be millionaires on October 28, 2021.

Coincidentally, October 28, 2021, was also the same day crypto exchange Crypto.com aired its commercial featuring Matt Damon promoting cryptocurrencies, in the “Fortune favors the brave!” ad at the height of the cryptocurrency bull run.

Several factors, including heightened regulatory scrutiny, unstable markets, geopolitical unrest, increasing inflation, and rate rises, continue to weigh on Bitcoin’s performance. Nevertheless, Bitcoin has reclaimed $20,000 in the last week, and Bitcoin bulls are battling to maintain a price uptrend at the time of publication after losing momentum to break past $21,000.

As things stand, Bitcoin is changing hands at $20,428, down 1.2% on the day but up by over 7% across the last week, according to CoinMarketCap data. 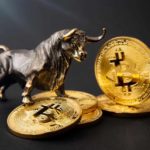 Bitcoin bulls battle to maintain price uptrend after losing momentum to break past $21,000