After El Salvador and the Central African Republic adopted Bitcoin (BTC) as legal tender, other countries are scrambling to keep up and introduce ways to regulate this novel asset class – including Paraguay.

Indeed, Paraguay’s second chamber of Congress (the Chamber of Deputies) has approved, with a 40-12 vote, a bill that would regulate cryptocurrency mining and trading, with certain modifications. The entire session was streamed on YouTube on May 25.

Now that the Chamber of Deputies has adopted this legislative framework, the bill will go back to the Senate, which originally passed it in a similar form in December 2021. After it goes to the Senate, the body has to approve the changes, and then the approved bill will proceed to the executive branch.

Specifically, the aim of this bill is to make Paraguay an international hub for miners, thanks to the country’s low electricity costs of about five cents per kilowatt-hour, which is the lowest electricity rate in Latin America.

Should the legislation become officially adopted as a law, it will force any individual or corporate miner to apply for an authorization for industrial electricity consumption, after which they will have to apply for a license.

On top of that, the law also envisions the creation of a registry for any individual or legal entity intending to get involved in crypto trading or custody services for third parties. However, the concept of exchange still seems to be missing.

That said, the bill also faced strong opposition. Opposing the legislation, Congressman Tadeo Rojas argued that the Chamber of Deputies’ budget committee recommended against it as well. He also added that the positive effect on job increase was low compared to the energy consumption required by crypto mining.

On the other hand was Congressman Sebastián García, who argued that the bill would set ceilings in order to align the energy consumption with the availability.

Interestingly, Finbold reported in late March that Paraguay was the first among the top three countries predicted by the CoinMarketCap community to be the next to adopt crypto as legal tender, followed by Venezuela and Anguilla.

These three top predictions remain the same at the time of publication. 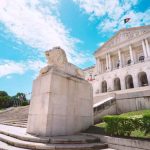