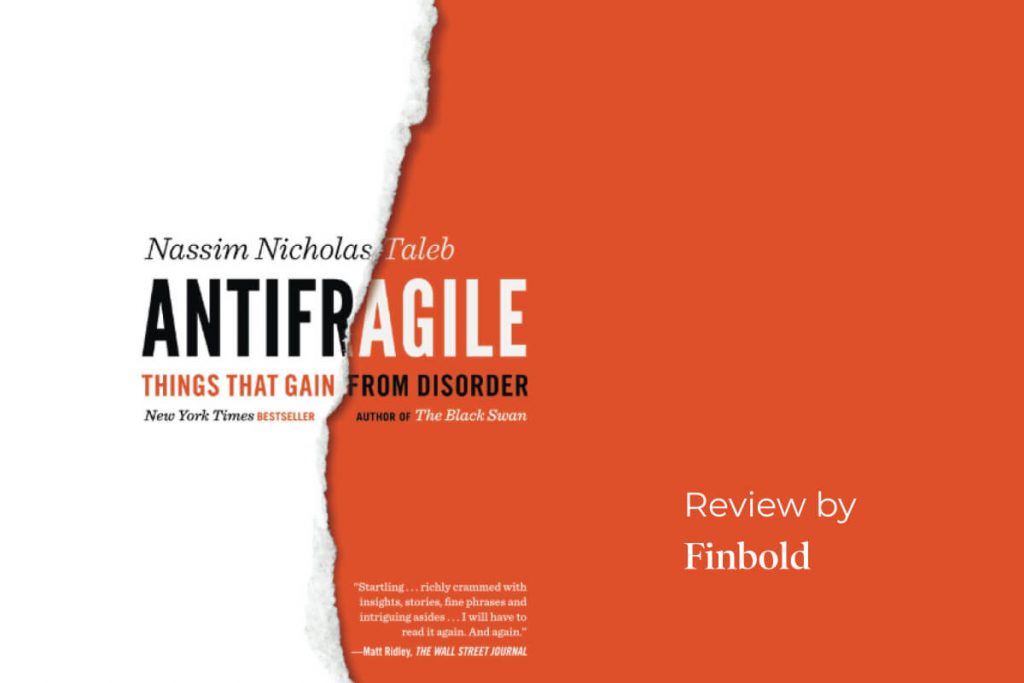 “Antifragile: Things That Gain From Disorder” is the fourth book from Nassim Taleb’s Incerto series, a follow-up on “The Black Swan” wherein Taleb introduces and describes the concept of antifragility throughout different domains: from economics and biological systems to technology, urban planning, history and mythology, investing and finance, etc. as a solution to the black swan problem.

The concept could be said to have been captured by Nietzsche’s famous saying of how that which does not kill us makes us stronger. Antifragility is said to exist on a spectrum together with the properties of the classes of things that are fragile (that break under stress and pressure and gravitate towards tranquility) and those that are robust (i.e., stable and resist breakdown, but overall indifferent towards disorder).

The difference between the three categories along the line of fragile-robust-antifragile is in how they tend to react to randomness — things that are antifragile improve and get better the more they get stressed and kicked around and like randomness and uncertainty.

In principle, if you have more of an upside than a downside in some given circumstances or situation, you’re said to be antifragile (or convex). Taleb refers to the life philosophy of the stoics. This is because he often tends to in his writings, emphasizing how people from ages past have shown to be much more grounded and thoughtful than us moderns after the Enlightenment.

For example, Seneca recognized that if he were wealthy there’d be no further upside to that after some time but there will likely be a significant downside if he were to suddenly lose that wealth (and therefore practiced living modestly recognizing the contingencies of life).

Similar notions are even directly embedded in non-alphabetic languages such as Chinese, as shown for example by the ideogram for “crisis” (危机) which is a combination of “危“, which means “danger”, and “机”, which means “opportunity”. Thus, “opportunity arises from danger” (although the implicit ontology of Chinese and the kind of different sense of the world and of time it conditions — and how that corresponds to a different approach to economics, understanding of market cycles, etc. is a subject worthy of an entirely separate post of its own).

Another example is how when one lifts weights some muscle fibers tend to break and then overcompensate by regenerating back stronger and more adapted to handle the stress that has been applied to them. Or how one can make oneself immune to certain lethal poisons by giving oneself small doses of that poison at a time over a period of time (or how vaccines work following similar principle for that matter).

In other words, levels of exposure to randomness, uncertainty, risk, and variance are what make us absorb and integrate valuable experience and memory which is from time to time crucial to evolutionary survival.

An antifragile system is created with a change in mind — feeding on stress, irregularity, and change. The stressors are flows of information input which the system must be capable of absorbing, integrating and learning from.

It is much harder to create such a system since an undertaking of the sort cannot be limited to an engineering problem, but requires rather a more ecosystemic approach (as it is not simply a software system but a multi-faceted, multi-dimensional social-technical system) but once it is in place, it drives business based on change and may even itself generate the change.

Taleb points out how our tendency to intervene too much with randomness in basically all walks of modern contemporary life. He notes, that the class of people that are in the business of doing that, (which he calls interventionista) tends to make us ever more fragile in the process due to the increasing lack of exposure to randomness, making our capabilities to adequately respond to real-world events atrophy as a consequence.

This proclivity of ours, of being excessively focused on order, control and fixing a lot of things which ought to really be left alone, often tends to drift towards monoculture, inertia, and stagnation. This, inevitably, leads to eventual breakdown and system collapse as there is no mind and/or body growth.

Examples abound – to some degree the 2008 subprime mortgage crisis can be said to have been partially a result of such inflated confidence coming in conflict with reality. Another recent example that comes to mind is the breakout of the Syrian war. Of course, there are numerous contributing factors to the accumulation of which pushed things beyond the tipping point, but there is little doubt that one of those factors had been the socio-political stagnation and heavily centralized control of the so-called Assad family regime at the time.

“Comfort makes you weaker. We need some variability, some stressors. Not too much, but just enough.”

In Antifragile, unlike the previous books, Taleb refers a lot to medicine and biology, noting how there had been times in history when medicine has done a lot more harm than good.

For example, in the late 19th century when the person who even suggested washing one’s hands before performing surgery was ostracized by the medical establishment for his, at the time, outrageous proposition (which is something obvious and common practice today). Or the cure-it-all pre-frontal lobotomy craze in the 20th century, or the many instances of antibiotics, opiates and other drug over-prescription today that cause antibiotic resistance, drug dependencies, etc.

Taleb mentions too how doctors tend to most commonly muddle the absence of evidence and evidence of absence in the practice of their profession.

“Never ask a doctor what you should do, but ask him what he would do if he were you and you will get a different answer,” says Taleb.

The latter raises questions of professional ethics which Antifragile also puts quite a bit of emphasis upon throughout the book.

Taleb points out how there are too many jobs and occupations today that perform unnecessary and even harmful operations (meaningless and non-productive at best) but on which the salaries and positions of many depend and as such must somehow justify their existence in pretending to be necessary.

“Too big to fail”

The “too big to fail” fallacy represents another typical case of something that is fragile as it is prone to systemic risk (because as it scales its dimensions it simultaneously also scales risk), contagion and sudden collapse (or what has come to be referred to as a single point of failure after the invention of peer-to-peer blockchains). Taleb explains it so:

An elephant is vastly more efficient, metabolically, than a mouse. It’s the same for a megacity as opposed to a village. But an elephant can break a leg very easily, whereas you can toss a mouse out of a window and it’ll be fine. Size makes you fragile.

As opposed to the totalizing “too big to fail” Antifragile instead gravitates towards the principle of “small is beautiful” – what is smaller tends to be more agile and flexible and better adaptable in the longer-term. And complex adaptive systems, which include everything alive and living today, are composed of many different (loosely coupled) small parts where each does their own thing, yet interact together in various adaptable self-organizing arrangements in response to environmental conditions and change, somehow always coherently maintaining themselves together as the same emergent whole (entity or phenomenon).

“Intelligence consists in ignoring things that are irrelevant.”

Taleb makes a difference between what he calls Greeks – that is, people who are more inclined towards theory and theorizing, and Romans, which tend to be rather practical and street-wise in comparison (embodied by the character of Fat Tony in Antifragile).

As humans, we are evolved to learn, acquire understanding and become antifragile only in the practice of doing, engagement and direct experience. Learning from failures and mistakes and coming to learn to thoughtfully and intelligently deal with the human condition of our ignorance and stupidity in a complex world is what much of both the Black Swan and Antifragile are about.

So, the wisdom of “fail fast and fail cheap” is particularly applicable here too, given how dynamic complexity is approached by way of gentle, safe probing and poking around in experimenting on a small scale to see what happens.

“Knowledge is not a series of self-consistent theories that converges toward an ideal view; it is rather an ever increasing ocean of mutually incompatible (and perhaps even incommensurable) alternatives, each single theory, each fairy tale, each myth that is part of the collection forcing the others into greater articulation and all of them contributing, via this process of competition, to the development of our consciousness.”

The quote above captures the spirit of Antifragile. As like his previous books, Taleb’s Antifragile is too filled with many comical anecdotes and examples of real-life paradoxes along the way, making it delightfully entertaining a read while being useful and refreshing, provocative and stimulating.

Applied finance is itself nowadays quite inter-disciplinary and heuristic in practice, borrowing models from everything from physics and biology to computer science, engineering and what have you since there are always principles and intuitions which re-apply across seemingly different and unrelated domains and fields.

Likewise, Antifragile doesn’t narrowly focus on a single one thing, neither is it a manual, a how-to or a 24-steps-to kind of book, but draws rather from many different areas and sources in making its point and articulating its wisdom.

What’s more, in all his work Taleb mercilessly criticizes and attacks what he calls “charlatans” and “bullshit vendors” (as well as IYIs – “intellectual yet idiot” and other forms of modern fraud), warning against people who give advice, opinion and expertise (financial or otherwise) without themselves having “skin in their own game” in taking the risks and consequences of their advice.

In that sense, Incerto are definitely not books on how to easily reproduce success by following some simple best practice recipes, but more of a philosophical body of work on the nature of probability and on epistemology (the branch of philosophy dealing with theories about knowledge) in very clear terms and readable, enthralling style and language.