Robert Kiyosaki, American businessman and author of best-selling personal finance book “Rich Dad Poor Dad” says he intends to invest his stimulus package in gold, silver, and Bitcoin. He mentioned this in a podcast with Morgan Creek Digital Co-Founder and founding partner and host of Pomp Podcast, Anthony Pompliano.

This is because the U.S Dollar is not reliable money as it is controlled by a group of rich people who created it. Gold, silver, and Bitcoin, on the other hand, are God’s money and people’s money. Thus, investing in them for the long term is a better idea, the billionaire said.

Bailouts are a transition to communism

The U.S. government had in the heat of the COVID-19 pandemic announced it was handing out bailout to citizens amounting to $2 trillion.

This package has raised a lot of questions as to what the state of the U.S Dollar would be when trillions are given as stimulus to citizens who cannot work due to the pandemic.

Kiyosaki says the stimulus is a slow transition from Capitalism to Socialism and then Communism. He added that the reason he is endorsing Bitcoin, a decentralized form of money, is because he does not trust the central government.

The U.S government had offered up to $350 billion in loans to businesses as a stimulus; to help them cope with the pressure caused by the COVID-19 pandemic. Kiyosaki says his aim of taking the stimulus is to invest in gold, silver, and Bitcoin. He acknowledged that he is not short of funds to run his company, the Rich Dad Company

The decision to invest in Bitcoin

History shows that Kiyosaki does not invest in things he doesn’t understand. He said this is motivated by his friend’s investment in the asset which yielded good profit.

He has also called on young people to invest in the number one cryptocurrency which has been referred to as digital gold and a reliable store of value.

So far, Bitcoin has a return on investment (ROI) of over 5,290% to date. It was the best-performing asset of the last decade based on this metric. Hence, there is the hope of it rising even higher after the halving which is coming next month. 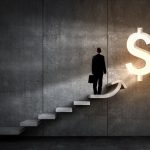