Cryptocurrency traders will be watching closely to see if Shiba Inu (SHIB), which gained enormous popularity in 2021, can shake off its meme token status and return to all-time highs in 2022.

SHIB has maintained its place in the top 20 cryptocurrencies by market capitalization for some time now, aided by an expanding number of holders as more retail investors enter the market and find the asset as a result of the asset’s enormous community of users.

Furthermore, the token has also benefitted from its accessibility; individuals wanting to buy Shiba Inu Coin will find it available on the top 10 leading cryptocurrency platforms, including Binance, Coinbase, KuCoin, and Kraken.

CoinGate, Uphold, and VirgoCX, three fast-growing exchanges and crypto trading platforms in the cryptocurrency industry, have also listed the asset.

Besides that, the asset has begun to find real-world applications, whether it is used in stores as a form of payment or through the development of a ‘Shiba Lands‘ in the metaverse, non-fungible tokens (NFTs), and burning to reduce the quantity, among many other applications that have increased its viability and increased its utility.

The token now has a market capitalization of $16.9 billion, but it is still a long way from the $41 billion it hit on October 29, so the question remains whether SHIB will be able to recover to such levels in 2022.

Traders want to see SHIB return to its October high of $0.00008, and with ongoing burn contributions, many anticipate that it will have a big impact on lowering SHIB supply, thus boosting its price.

In order to determine the direction of SHIB, it is necessary first to identify this barrier. Closing of the four-hour candlestick below $0.0000274 will invalidate the bottom by causing a lower low to be established. In order for a 15% correction to the $0.0000235 support level, this development must first take place.

The Global In/Out of the Money (GIOM) model developed by IntoTheBlock lends support to this short-term bearish notion for the meme tokens price.

If the price falls to the previously specified ranges, it is probable that these holders will collect even more tokens, and it is also likely that this is where the SHIB will create a base during a slump.

On the other hand, if this scenario proves the bearish thesis incorrect, it signals that the bulls are in command and are likely to bring Shiba Inu’s price back above $0.00004.

Finally, crypto trader and host of the podcast The Wolf Of All Streets, Scott Melker, pointed out that holders of SHIB for more than a year have recently been increasing their holdings over the last month in tandem with whale accumulation; he noted that:

“Addresses that have been holding for over one year, have increased their SHIB balance over the past 30 days by roughly 32.48%. And it appears that the institutional or whale appetite has been increasing recently.”

Melker also noted that large transactions worth over $100,000 reveal the level of institutional activity on-chain.

“The Volume of these transactions increased considerably this week [February 7], recording multi-months high. A total of $389.89m were transacted, but what’s more interesting, is that these transactions account for 81% of the total SHIB on-chain volume.”

In light of the rising use of cryptocurrencies in the market, there is a possibility that SHIB may return to, or perhaps surpass, its all-time highs in 2022.

When speculation became rampant, SHIB witnessed massive gains in 2021, as the market saw a significant amount of speculative activity. Despite this, there is always the possibility of dramatic price corrections, particularly given the large number of SHIB whales accumulating in the market recently.

In spite of this, as the market sentiment slowly shifts back toward the bullish side, with new users expected to enter the crypto space in the coming years, and with leading platforms such as Robinhood who have not listed SHIB yet, the meme coin has every opportunity to return to previous highs this year, but this is still speculative at this point. 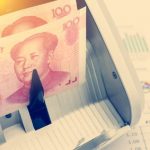 China’s inflation dropped to 0.9% in January, hitting a 4-month low