Numerous stocks, both big and small, are struggling to hold their prices; in particular, the tech sector has been decimated.

Likewise, Bitcoin, which has long been termed ‘digital gold’ invoking its alleged properties to serve as a hedge in turbulent markets, also fell below $28,000 this week from its peak of $69,000 in November of 2021. Currently, Bitcoin is down -63% from its all-time highs.

Final proof that ‘nowhere to hide’ applies: the U.S. bond market has also been struck hard this week, with losses.

Who or what is to blame?

It’s difficult to place sole blame for the overall market turmoil on one factor; however, the most recent and most cited culprit seems to be inflation. Inflation readings for April, which were released on May 11, came in higher than expected, which in turn caused more anxiety in the already anxious markets.

After the readings came in, stocks sold off on May 11, which seemed to spill over into the crypto space, where the biggest fiasco relating to Luna and the stable coin tied to the currency appeared to rattle the crypto markets.

Yet, the troubles don’t seem to end with inflation; the war in Ukraine has rattled commodity markets where record-high prices were seen for oil, gas, lithium, and other commodities. European Union is looking at ways to ban Russian energy from its continent completely, which might change oil prices in the near term.

Finally, to round out the market’s anxiety, the Federal Reserve (Fed) has decided to be more aggressive in raising rates and selling off its $9 trillion balance sheet.

When the future of markets looks bleak, skilled investors take a long-term perspective. Market meltdowns happened in the past but have never been a permanent feature but more of a temporary glitch.

Historically, markets have gone up, and probably all experts would anticipate the same. If investors’ risk appetites can handle the volatility, the best option is to stay in the markets rather than trying to time the markets. Even the greatest investors of all time use this adage to good measure since it seems to produce the best long-term results. 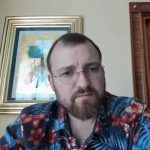 Charles Hoskinson: Global economy 'will collapse' as it 'cannot sustain itself'